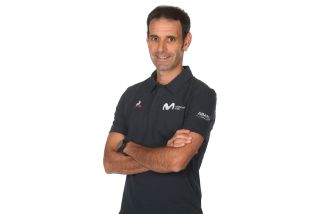 Patxi Vila has been confirmed as the new head of performance at Movistar. The Basque left Bora-Hansgrohe last month and it had been reported in the Spanish press that he was likely to take up a role with Eusebio Unzue’s team.

In a statement released by Movistar on Monday to announce his arrival, Vila described his move to the team as something of a homecoming. Vila rode for the team – then called iBanesto.com – in the first two years of his career as a rider, in 2001 and 2002.

Vila later rode for Lampre before serving an 18-month suspension after testing positive for testosterone in 2008. He returned to the peloton with De Rosa-Ceramica Flaminia and retired at the end of the 2012 season.

After working with Specialized, Vila joined Tinkoff-Saxo as a directeur sportif in 2015 and began coaching Peter Sagan. He moved to Bora-Hansgrohe with the Slovak in 2017 but left the team last month. Sagan recently told Cyclingnews that he had been coached by former teammate Sylwester Szmyd during the 2019 season.

Vila will have help Movistar overcome the loss of Nairo Quintana and Mikel Landa and develop Spain's Enric Mas as the team's new Grand Tour leader.

“Through all these years, already before becoming a pro rider and both during my sporting and technical careers, I've always held the Movistar Team as a reference,” Vila said on Monday.

“It's my home team, and the place where my idols made a name for themselves, such as Pedro Delgado or Miguel Indurain. I've spent three wonderful seasons as part of the Bora-Hansgrohe squad, supporting the team's sporting success, and in this moment of profound transformations the Movistar Team is currently undergoing, I thought it was the right time to come back home."

Vila is the latest in a long line of former team riders to join the Movistar staff, which already includes José Luis Arrieta, José Luis Jaimerena, Chente Garcia Acosta and Pablo Lastras. The 2020 management team will also include Max Sciandri, who joined Movistar as a directeur sportif last year and guided Richard Carapaz to overall victory at the Giro d’Italia.