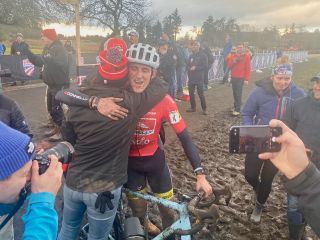 Gage Hecht (Donnelly-Aevolo) could have almost assured himself a national title by riding in the U23 race at the USA Cycling Cyclo-cross Championships in Steilacoom Park outside of Tacoma, Washington, on Sunday, but the 21-year-old's second effort at the elite race after moving up last year earned him the stars-and-stripes 'cross jersey when he laid waste to Cannondale-Cyclocrossworld teammates Curtis White and Stephen Hyde, the three-time and defending champion.

Hecht finished third in the 2018 elite race behind Hyde and White, but on Sunday he was clearly the best 'cross rider in the country after he got tangled up in the course tape with US Pro CX Calendar winner Kerry Werner on an off-camber descent, and the Kona-Maxxis-Shimano rider went down hard, seemingly ending his chances for the jersey.

Hecht had lost his line on the downhill, shot through the tape and into the crowd, emerging with tape in tow. Werner got caught up in the tape Hecht was dragging, and the Kona rider went over his handlebars. It was the only moment when Hecht appeared out of control.

"I think somebody had crashed on that before me or something, because there were a bunch of leaves over the ruts that I was hitting over the previous laps," Hecht said of the descent that caused the trouble. "I just missed it by an inch or so, and the wheel slid that way, and I flew into the crowd the other way."

Sailing into the spectators at 30 miles an hour was a scary moment for Hecht. But he managed the situation – and got a lot of cooperation from the fast-moving fans.

"I'm pretty happy I didn't hit anybody," he told Cyclingnews, although he admitted the carnage had a lasting effect.

"I got a little out of it because I felt terrible for Kerry when I saw him flip over the bars," he said. "There was lap in there where I was kind of just reeling, like trying to get my head back in the game. Then after holding off Curtis and Stephen for another lap, I was, like, 'OK, you're back. You can do this.'"

Unfortunately for Werner, the episode did indeed end his chances of taking the title as White and Hyde sailed past. The 28-year-old, who finished the race in fourth place, 1:27 down on Hecht, approached the younger rider behind the podium and gave him a hug as Hecht apologised.

"He's a really good guy," Hecht said of his competitor. "He's always great to race with. I'm not happy that it happened to him, but I'm glad that he was a good guy about it and came up and shook my hand afterwards."

How to take out your opponent.Better footage of the incident between - later champion - Gage Hecht and Kerry Werner at the US National Championships cyclocross.📹 Insta: theonejefe pic.twitter.com/6eLl6loKgMDecember 16, 2019

On a good day

Hecht told Cyclingnews his early sensations were good and that he knew he was on a good ride, but the reality of the situation and his chances for a stars-and-stripes jersey didn't sink in right away.

"I came up the second run-up, the down/up thing, and I had a little gap, which kind of surprised me," he said of the first lap. "I didn't really think too much of it there. I was just thinking that I needed to maintain this and not go too deep. Kerry was with me then.

"About three laps in, after I'd really maintained that gap from Curtis and Stephen, is when I kind of realised, like, 'OK, this could happen, but it's going to take a lot of luck and a lot of work.'"

By that point, Hecht still had about 40 minutes to hold off his rivals – teammates who were riding together.

"So I just kept pushing it in," Hecht said, "and the only place when I really knew I had it was at the bottom of that last descent. I knew from previous laps that it would be the most dangerous part of the course, just making it down to the bottom of the thing without going through the tape again or going over the bars.

"I was sweating bullets all the way getting there, but after that it was good," he said. "I knew I had 13 seconds to play with, so I just needed to ride it in and stay safe."

Hecht soloed across the line with plenty of time for an emphatic salute as White came in 17 seconds later for silver and Hyde crossed the line for bronze at 23 seconds in arrears.

Heading to Europe with a new jersey

The Donnelly-Aevolo rider won't be wasting any time soaking in the glory of his Sunday win. Instead, he'll board a plane on Monday for a return trip to Europe and the UCI World Cup, where he races with the U23s. He'll race the Namur World Cup on December 22 with the ultimate focus being the UCI Cyclo-cross World Championships in February.

"The U23s have been rough on me so far in Europe, so we'll see how it goes. But I'm optimistic about it. Luckily, winning a national title halfway through the year takes a lot of pressure off my shoulders, so I've had a good result already this season, and it's like anything on top of this is just gravy."

Hecht is obviously proud of taking a national title at just 21 [he turns 22 next month - ed.], but he was hesitant to talk about how many jerseys he might be able to add in the ensuing years, instead pointing to the rivals he'd need to face down to pull that off.

"That's a hard question," he said when asked how many jerseys he could potentially win. "The competition is going up again in America, so it's hard to say. Curtis and Kerry are really strong. They were strong last year, but they've really stepped it up again this year. If they keep growing and I keep growing, I think we'll keep trading off for the next few years and seeing where each other are. It could always be somebody different over the next five to 10 years, too.

"We've also got a lot of juniors coming up," he said, "like [junior national champion] Andrew Strohmeyer, who's killing it. And Magnus Sheffield is super strong. He got third at the junior road Worlds. There's going to be some good racing coming up."

Hecht, who rides for U23 development team Aevolo on the road, is a serious young rider who is all business on the bike, but during 'cross season he allows a bit of whimsy on his machine as a nod to his father, who got him into cycling. A small, rubber Bart Simpson action figure adorns all his bikes. He explained to Cyclingnews that it’s a family heirloom – of sorts.

"My dad raced quite a bit when he was in his 20s and 30s, and he had a buddy that kind of looked like Bart on his team, and my dad kind of has a Homer-ish look, and so they bought each other figurines. My dad ended up with the Bart Simpson thing," Hecht said of the figurine that is currently riding his brake cable.

"Somehow it had a hole drilled through it at some point before I got it. He put it on my bike as fun little token when I was 10, and he stayed on it. We got a second one about a year ago, so now he's on both bikes," Hecht said. "He's been on pretty much every bike. He was on a 600C Redline. I just kept putting it on new things, and now he's on the Donnelly."

Just don't expect to see that sort of whimsy on Hecht's road machines.

"It's just 'cross. It's a special thing I have going for 'cross because it's more of a fun party and an exciting atmosphere," he said. "In road, people criticise you more about weight and aerodynamics. So it's a fun little thing I do for 'cross. A lot of people recognise it, and it's been cool."