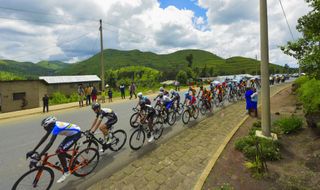 The Tour of Rwanda has become a hugely popular event since it was re-introduced in 2001 following the Central African country's civil war (Image credit: Tour of Rwanda)

Members of the Rwandan cycling federation, including its president, Aimable Bayingana, have resigned amid accusations of corruption and sexual abuse, according to various reports.

Building for the future in Rwanda

Tour of Rwanda draws in the crowds - Gallery

The BBC reports that both the Rwanda Investigative Bureau (RIB) and Rwanda's sports ministry are looking into the accusations, which Bayingana and members of his team on the Ferwacy – as the federation is known – have denied.

"We are aware that sexual assault and corruption happens and it is our prerogative to fight it," the BBC quoted the permanent secretary at the sports ministry, Shema Maboko, as having said.

Some of the accusations are said to have come from former national coach Jonathan Boyer in an open letter to Bayingana, accusing him of not taking action against coaches alleged to have sexually harassed female riders, the BBC said.

Boyer was the first American rider to take part in the Tour de France, and since 2007 has been heavily invested in cycling in the Central African country, which was ravaged by civil war in the early 1990s.

According to L'Equipe, Boyer left the country several months ago due to the ongoing situation, but the French newspaper also reports that a new Ferwacy committee will be elected in order to still run the Tour of Rwanda, which is set to run from February 23-March 1 next year. Rwanda is also a candidate for the 2025 UCI Road World Championships.