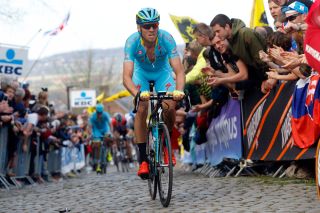 Lars Boom has decided to officially call an end to his road career after his Roompot-Charles team folded.

The 33-year-old Dutchman was unable to find a new contract and has opted to focus on gravel and mountain bike racing, according to Wielerflits.nl.

In 2017, he underwent cardiac surgery to correct an arrhythmia. He came back and won the Tour of Britain and a stage in the BinckBank Tour that year but has not stood atop a road podium since then.

His manager suggested there still might be some road racing in Boom's future. "We aren't ruling out - whether at a lower level or not - he will race on the road. However, this will be in support of gravel and mountain bike competitions. That is where Lars now has the highest priority."

Boom is looking forward to reigniting his passion for racing in different disciplines. He joins American Peter Stetina in leaving the road for off-road pursuits.

"I have had a great and long road career on the road, with a number of great victories and podiums that I am proud of. By my current team stopping, there was an opportunity to shift my focus to a passion that I have cherished for some time. Those are gravel and beach races, as well as MTB marathons."