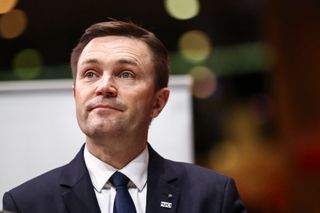 UCI president David Lappartient has expressed concerns over the economic impact that the novel coronavirus has had on some professional cycling teams. In a report published in De Telegraaf on Monday, Lappartient said he hoped all the teams would survive until the end of this season.

"We know that three, four, five teams have more problems than other teams," said Lappartient. "We hope they all reach the end of the season."

Lappartient did not specify which teams he was referring to. However, six WorldTour teams started to negotiate reductions to riders and staff salaries in response to the COVID-19 crisis including EF Pro Cycling, CCC Team, Astana, Lotto Soudal, Bahrain McLaren and Mitchelton-Scott men's and women's teams.

The UCI announced in April that the CPA and AIGCP men's teams association had signed an agreement to safeguard principles and processes for UCI professional men's teams. The document highlights a strategy for allowing fair negotiations between teams and riders to take any potential salary cost-cutting measures, such as reducing or deferring rider and staff salaries.

The same agreement has been extended to women's teams and agreed upon by CPA Women and UNIO, and includes the addition of using the team bank guarantees.

The UCI has been forced to suspend all racing until July 1 – and August 1 for the UCI WorldTour and UCI Women's WorldTour. In addition, the sport's governing body confirmed that organisers of some 800 events across all disciplines and categories have requested the postponement or cancellation of their events. That figure represents a third of the UCI International Calendar.

"Our union is going through a crisis that we have not known since World War II," said Lappartient. The organisation confirmed that it had undergone its own cost-cutting measures in April, which included placing all 130 staff members on full or partial furlough, while senior management and elected members have taken unspecified salary cuts.

The UCI recently announced a revised late-season calendar that placed a priority on the three Grand Tours and Monuments, along with a new Women's WorldTour calendar of 18 events. Racing is scheduled to begin on August 1 and end on November 8. However, there are concerns that some teams are under financial strain and will not be able to financially commit to the late-season schedule.

"I fully understand: we're regularly monitoring the situation and we've created a protocol to reduce the costs of transfers," Lappartient told Corriere della Sera. "Unfortunately we're not a bank: we've only got €600,000. We're hard on the calendar so that we can put on the races. It's the only way to give some oxygen to the teams."

The UCI Road World Championships are scheduled to take place from September 20-27 in Aigle-Martigny, Switzerland. However, the Spanish news outlet Marca reported the possibility of moving the event to November in the Middle East.

"I'm not aware of that," Lappartient said. "We want to hold the World Championships in Aigle-Martigny on the hardest and most beautiful course of the last 40 years. It'll be historic, as for the first time riders who have ridden the Tour de France and who are preparing for the Giro d'Italia will go head to head. It'll be a special World Championships."