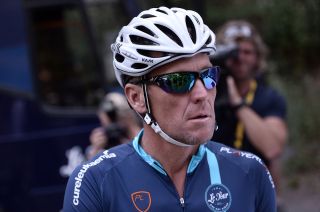 Lance Armstrong looks on upon his arrival in Rodez, southwest France, after riding a stage of The Tour De France for a leukaemia charity (Image credit: Getty Images Sport)

A doping researcher who formed part of Lance Armstrong's legal defence team has been banned from sport for four years after testing positive for a number of banned substances at the 2019 USA Masters Track Championships.

John Gleaves, an associate professor of kinesiology at California State University, Fullerton, accepted the ban, according to a statement from the US Anti-Doping Agency (USADA). He had tested positive for various metabolites of the anabolic steroid Oxandrolone, as well as the anti-estrogenic drug Clomiphene.

Oxandrolone can be used to build muscle, while Clomiphene – usually used to treat infertility in women – can raise natural testosterone levels.

It will cost you $30,000 to ride with Lance Armstrong for a week

Gleaves' primary research interest, according to his university biography, is "doping in sport", while he has served as co-director for the International Network for Doping Research and edited a book on the subject – Doping in Cycling: Interdisciplinary Perspectives.

In 2015, Gleaves was an expert witness for Lance Armstrong during the federal government's whistleblower fraud lawsuit brought by Armstrong's ex-US Postal teammate Floyd Landis. Gleaves' evidence pertained to the widespread nature of doping in the pro peloton at the time of the US Postal doping programme.

"Gleaves, 36, tested positive for oxandrolone metabolites 17α-Hydroxymethyl-17β-methyl-18-nor-2-oxa-5α-androst-13-en-3-one and 17β-Hydroxymethyl-17α-methyl-18-nor-2-oxa-5α-androst-13-en-3-one, as well as clomiphene and its metabolite 4-hydroxyclomiphene, as the result of a urine sample collected in-competition at the Masters Track National Championships on August 31, 2019," read a statement from USADA.

"Gleaves accepted a four-year period of ineligibility that began on August 31, 2019, the date his positive sample was collected. In addition, Gleaves has been disqualified from competitive results obtained on and subsequent to August 31, 2019, including forfeiture of any medals, points and prizes."

Gleaves will be eligible to return to competition in September 2023.

In April 2018, Lance Armstrong reached a settlement with the federal government for $5 million, a fraction of what he might have paid had the case gone to trial. The Texan, who won two Tour de France stages in the early 1990s, remains banned from sport for life.