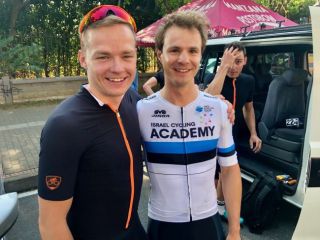 The 26-year-old spent two seasons with Team Illuminate, having begun his professional career with Delko-Marseille Provence in 2016. Laas sprinted to three stage wins at the Tour de Korea in June.

Team manager Ralph Denk said that Laas would form part of the sprint train at Bora-Hansgrohe. The German squad claimed sprint wins in all three Grand Tours in 2019 through Pascal Ackermann, Peter Sagan and Sam Bennett. It remains to be seen if Bennett will remain with the team in 2020, with Deceuninck-QuickStep monitoring the situation should he become available.

“Martin is a talented rider who is not afraid of challenges. He has won several times over the past few years at smaller professional races, and we feel that he is ready to take the step up to the WorldTour next year with us,” Denk said.

“We will therefore work on preparing him adequately for racing at this level, and we believe that he will be valuable in strengthening the team’s sprint train. He is very motivated to do so, and I’m looking forward to seeing the progress that we can make together.”

Laas was on hand for Bora-Hansgrohe’s camp in Austria last week as the squad began to outline its plans for the 2020 season. During the season, the Estonian bases himself in Girona, where he shares an apartment with his former schoolmate Mihkel Räim (Israel Cycling Academy).

“The most important goal for me next year will be to utilise the support of the team to adapt to the WorldTour level, and grow together with my teammates and the staff,” Laas said. “It will be a challenge, but it’s one that I think I will enjoy. I’m looking forward to supporting my teammates during the races and doing all that I can to help them achieve good results.”