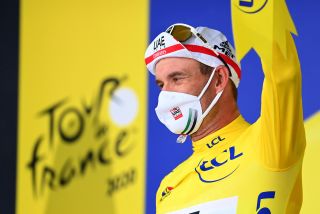 In spite of the UAE Team Emirates' mask, there was no mistaking the beaming smile across Alexander Kristoff’s face as he reflected on his Tour de France stage 1 victory in Nice that earned him the first yellow jersey of his career.

“I’m 33 years old and have four kids, but I still managed to win at the biggest race in the world, so it gives hope for everyone,” said the Norwegian.

“The Tour couldn’t have started any better and the yellow jersey is a bonus. I’m proud and humbled. Even though I guess I will lose the jersey tomorrow, I will enjoy the day riding in it.”

Kristoff explained that he has come to the Tour looking for stage wins but knowing that his UAE team will be focusing on the GC hopes of Tadej Pogačar and Fabio Aru.

“I knew I was going to be alone in the sprints, that was clear, and I know that a guy who’s really good on his own is Peter Sagan so I stayed on his wheel,” Kristoff said of the hectic finale along the seafront boulevard of the Promenade des Anglais.

“Then I saw Cees Bol had some teammates and he started early and that was like a good lead-out for me. I knew I had good legs and when I came off from his wheel I was quite confident I would take it. I can’t quite describe the feeling.”

Kristoff said his goal now will be to go for more stage wins, but played down his chances of challenging for the points jersey. “I’ve never been close to winning the green because Peter [Sagan] has always been quite far ahead. I’ve finished second to him twice but there was an ocean of points between us,” he admitted. “I’ll try to get points, not necessarily for the green jersey, but to prepare for the sprints later on, to practice.”

Kristoff described how he had lined up at the recent Critérium du Dauphiné, which didn’t feature a single stage for the sprinters, with the goal of getting himself into the right shape for the Tour. “I suffered every day, it was mostly a suffer camp,” he joked. “I knew if I didn’t train and race hard I would suffer at the Tour.”

Riding the Tour, he added, will carry towards his primary objective this season, the Northern Classics. “My main goal is Flanders and Roubaix. That’s in the back of my mind and that’s why I wanted to go to the Tour, to get into top shape with this in mind,” he said. “Maybe my shape is a bit better than I thought it would be. Hopefully I can be in even better shape in October.”

The Norwegian said he felt the right decision had been made by the riders to neutralize the racing when the roads became slippery in the rain.

“There were a lot of guys crashing and I think Jumbo-Visma started to calm the pack down. It was slippery on every corner so I think it was the right call,” he explained, adding. “I’m used to these conditions in Norway. Yeah, it was slippery, but temperature-wise it was like being back home.”