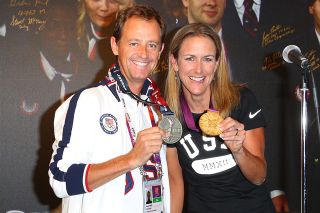 Coach Jim Miller and Kristin Armstrong given the Order of Ikkos medal at the USA House at the Royal College of Art in 2012 (Image credit: USA Cycling)

"We thank Scott for all that he has done for this organization and the athletes," said USA Cycling President and CEO Rob DeMartini. "We are confident in our position and readiness as we head into Tokyo and expect to deliver our performance commitments this summer."

Miller, who worked for USA Cycling for 17 years before leaving two years ago to work for TrainingPeaks, had a long history of success in the high performance programme, leading teams to 14 Olympic medals including a trio of gold medals by Kristin Armstrong.

Small heartbroken over missing out on US selection for Rio Olympics

"I am excited to return to USA Cycling and build on the past successes to develop athletes to achieve more winning performances in the future," Miller said in a press release. "I am eager to bring the data-focused learnings from TrainingPeaks I've developed over the past couple years and share them with the future stars of American cycling."

Miller has served as Athletic Director and then Vice President of Athletics, but was replaced in that role when Schnitzspahn moved across from the US Olympic Committee and named Vice President of High Performance after USA Cycling was forced to revisit its selection procedures following a number of arbitration hearings ahead ofthe 2016 Olympic Games. Miller, who served as Kristin Armstrong's personal coach, was accused of favoritism in the Olympic selections.