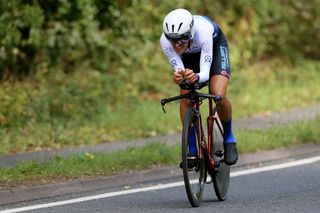 James Shaw (SwiftCarbon) gives it everything on the stage 6 time trial of the 2019 Tour of Britain (Image credit: Getty Images)

After riding with Lotto Soudal as a stagiaire at the end of the 2016 season, and having ridden for the team's under-23 feeder squad, Shaw spent the two subsequent seasons with the Belgian WorldTour outfit, but was not retained for 2019.

"I was young when I joined Lotto Soudal, and it didn't quite work out, but I can definitely take everything I learned there with me in my career," Shaw said on the Riwal Readynez website. "There are quite a lot of riders on the team next year that have professional experience both from the WorldTour and Pro Continental, and I think we can get to work very well together as one unit if we put together everything we've learned."

Shaw's year at Continental level nevertheless saw him ride the Tour of Britain, the Tour de Yorkshire, where he finished fifth overall, and the Prudential RideLondon-Surrey Classic WorldTour one-day race – the latter with the Great Britain team.

"I'm very excited to get back to professional level after a year at Continental level," he said. "I think this is a great opportunity for me, and I feel very motivated and positive about the future with Riwal Readynez."

The 2020 line-up also includes Norwegian rider Sondre Holst Enger, who's ridden at WorldTour level with IAM and AG2R La Mondiale, and joins for next season from Israel Cycling Academy, and former under-23 European time trial champion and two-time elite Danish time trial champion Rasmus Quaade, who heads into his second season with the team.

In terms of where those results might come from, Shaw admitted that returning to a higher level for the new season brings with it a change of scenery, but that he'll be trying to put his climbing abilities to good use.

"I find that I keep changing a little bit every year, so it's hard to put a specific definition on me," he said. "But I definitely prefer hilly terrains and smaller GC races, which is where I can get results."