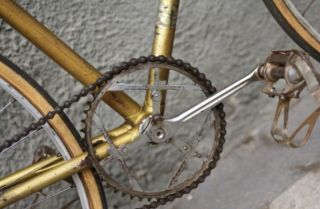 Here at Cyclingnews we've been scouring the internet for bike deals, and this time we've dug up a real beauty.

Bartali's career was interrupted by World War II, but he added one more each of the Giro and Tour after the hostilities ended and racing resumed, winning his third Giro in 1946 and taking his final Grand Tour victory in 1948 at the Tour de France.

The bike up for grabs on eBay was made for Bartali in 1947 by Bianchi Ugo, the famous Legnano frame builder, according to the seller, who also provides documentation.

"This bike was certified by Bianchi Dino (the son of Bianchi Ugo) about ten years ago before dying," the seller writes. "Bianchi Dino was a great expert in Legnano bikes made by his father and very famous all over the world for Alfredo Binda toe straps. The bike's frame number is 4716 where 47 is the year 1947 and 16 is the 'reparto corse' serial number."

The bike was reportedly purchased by a fan after the 1947 Giro - in which Bartali was second to Fausto Coppi and won a stage - and then left boxed up for 60 years. The seller says the bike is in original condition and was only used "a few" times.

Check out the bike on eBay here

"This bike was found with the original pump holder and his original Silca pump," the seller writes. "The Silca pump is one of the first model as we can see in the Gino Bartali picture where Gino is with his wife and his two little sons Luigi and Andrea. No one disassembled the bike or a part of that. There are also original Brooks toe straps, Brooks saddle, Gara stem, Campagnolo hubs, Universal brakes and FOM pedals."

The bike also has Bartali's trademark two left axle caps. The two left caps allowed Bartali to screw them by himself, a precautionary measure he preferred after serious problems with an axle cap cost him the 1940 Giro to young upstart Fausto Coppi.

Aside from the fame and notoriety Bartali achieved on the bike and in his epic battles with rival Coppi, the Italian played a lesser-known role in helping Italian Jews during World War II, a story that has only recently come to light and earned Bartali the honour of Righteous Among the Nations by Yad Vashem, the Israeli Holocaust memorial.

Relying on his fame as one of Italy's most renowned cycling champions, Bartali was given the freedom to train and move about unrestricted, and so he was able to transport forged travel documents between towns. This bike was built and used long after those terrifying days, but it is an echo from an era that saw many rise to face the evil of the day.

The gold paint is chipped and faded in many spots, and the bike sports a single chainring on the front. It's got pink 'Giro' bar tape, with the brake levers sporting strips of tape as well, as Bartali preferred. It is simply a one-of-a-kind piece of cycling lore, and, in theory at least, it could be yours.