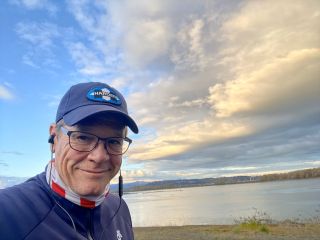 It is with deep sadness that we share the news of the passing of our dear colleague, Pat Malach in Scappoose, Oregon at the age of 55.

Pat was a respected and popular member of the Cyclingnews editorial team. He joined in 2012, first as a freelancer, and then later as a full-time member of the North American team. When he joined, Pat immediately stood out with new angles and fresh ideas for stories. Pat held himself to the highest standards of journalism – integrity, impartiality, and accuracy.

He never said no to covering a race, team camp, or press conference. Pat traveled to Argentina, Colombia, Israel and all over the United States in search of stories. Pat cared deeply about cycling and the people involved in it: he was a champion for the underdogs, the neo-pros, the Continental teams, and he delighted in learning what drove riders of all backgrounds to this common passion.

He was a devoted champion of domestic racing in the United States and was a thorough and hardworking journalist. Having spoken to a number of his colleagues in the last few hours the word that has resonated so deeply and occurred so frequently is inspiration.

Pat was inspirational in the way he conducted himself as a writer. Whether he was interviewing the biggest stars or the promising juniors, he always treated everyone with the same respect and attention.

He was also an inspiration in how he rose each morning for his early ride, often taking the time to post images of sunrises and sunsets on his Twitter feed. As of late, he would share songs he liked and Pat was never one to hold back with a witty line or post when he felt the situation was right. More importantly, Pat was an inspiration in how he treated those around him. He was kind, he was generous, he was the sort of person we should all aspire to model ourselves on.

As a colleague and as a friend, he will be greatly missed by everyone who was lucky enough to work with him.

Over the coming days, I’m sure you’ll hear more about Pat from those in the cycling community and of course, his friends on Cyclingnews will pay their respects in their own ways.

But at this difficult time, our thoughts and sincere condolences go out to Pat’s family and close friends.