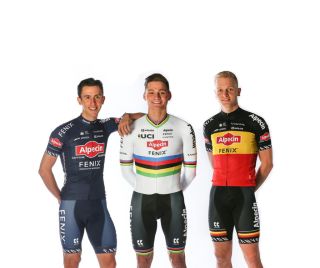 The Corendon-Circus team, home to Mathieu van der Poel, have changed their name and rebranded as Alpecin-Fenix for the 2020 season. The new sponsors had been rumoured for several weeks and were confirmed on New Year's day before van der Poel competed in the new colours at the DVV Verzekeringen trofee GP Sven Nys cyclo-cross race.

The Dutch team, run by Philip and Christoph Roodhooft, will wear a navy blue kit, made by Kalas, as they move up to the Professional Continental ranks in 2020.

Shampoo brand Alpecin continues its involvement in cycling after sponsoring the Katusha team for the past two years, a team which has now folded. Meanwhile, Fenix, an Italian interior design materials brand, owned by a Dutch company Broadview Holding, joins as co-title sponsor. Canyon remains as bike sponsor, with the logo on the shorts.

"We are really pleased to continue our collaboration with Alpecin-Fenix as bike sponsor and partner," said Roman Arnold, head of Canyon.

"Since the beginning, we have believed in Philip and Christoph Roodhooft's vision to create a multi-disciplinary team that can be competitive in more than one discipline. And having the incomparable Mathieu van der Poel racing Canyon Bicycles on and off road and in cyclocross is simply unbelievable.  We've enjoyed an incredible number of wins in all categories with this team, so we can't wait for the season to begin for Alpecin-Fenix."

It's all change for the team in 2020. Having previously been a cyclo-cross oriented outfit, with a limited road programme, Alpecin-Fenix have acquired a Pro Conti licence and bolstered their roster significantly.

Although Van der Poel will continue to race cyclo-cross for the first couple of months of the year, and then target mountain bike gold at the Tokyo Olympics, the Dutch sensation will have an increased road schedule after a breakthrough 2019.

The Classics will be the main focus, after the 24-year-old won Amstel Gold Race, Dwars door Vlaanderen, and Brabantse Pijl in his debut spring campaign.

The team have made a string of new signings for the road, including Sacha Modolo, Petr Vakoc, Kristijan Sbaragli, and Scott Thwaites.

The word is out! Let’s say #AlpecinFenix from now on. Check out our brand new blue @kalas_sportswear kit. Learn more about our project on the 3rd of January! Alpecin-Fenix