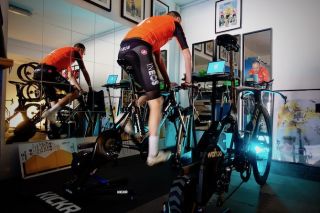 The races, organised by RCS Sport in collaboration with BKOOL and with partners Tissot and Enel, will be broadcast live in on VRT Sporza with distribution in Italy, Portugal, Poland, Israel, Brazil, Colombia, the USA and Canada, China and South Africa, and also streamed on The Challenge of Stars' official social channels (Facebook and YouTube).

You can watch the Challenge of the Stars, no matter your location, with ExpressVPN.

"At a time like this when we are unable to race it's great to be able to use technology to put on an event like The Challenge of Stars and bring entertainment to the cycling fans," Froome said in a press release. "I'm looking forward to taking on this new type of challenge against some of the top riders in the sport."

The racing begins with the sprinters on Saturday, May 23 at 16:30 CEST with eight sprinters going in four heats on a 1.2km course in the Tuscan countryside, with an average gradient of 0.97% and a maximum of 2.53%.

"The Challenge of Stars format, with its one-on-one knockout matches, is something innovative and unpredictable among the virtual races seen so far," Vincenzo Nibali said. "While we are waiting for real races, on the road, I think this format is a nice way to give fans a show and create a challenge between great champions."

Several of the channels are available on popular cord-cutting television streaming services. Sling TV is offering $10 off for the first month while Hulu is offering a free 7-day trial.