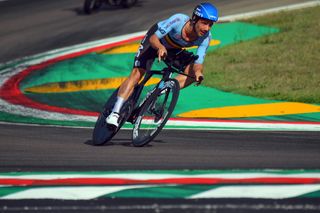 Belgium's Victor Campenaerts rode to eighth place in the elite men's time trial at the World Championships in Imola, Italy, on Friday. While the 28-year-old told the Belgian media afterwards that he wasn't disappointed, having given it everything, he admitted that he'd hoped he might have had a better day, having taken aim at a podium place.

On Thursday, Campenaerts had said that he'd hoped that it might be possible to get two Belgians on the Worlds TT time trial podium, but it proved that only compatriot Wout van Aert was able to achieve a spot in the top three, finishing second to Italy's Filippo Ganna, while Switzerland's Stefan Küng took the final spot on the podium.

Campenaerts came home in eighth place, 53 seconds down on Ganna, and 23 seconds behind Küng, but the Belgian – who took the bronze medal at the event in 2018, and was European champion in the discipline in 2017 and 2018 – had no excuses other than it not being his day.

"I had to hope for a good day, and I got that, too, but it wasn't a super day, and so it could have gone better," he admitted.

"There was a lot of wind in the beginning, and I knew you had to start hard. But in the last three kilometres, I had to slow down a bit," Campenaerts said of the mainly flat, 31.7km course.

"I'm not super happy," he said, "but I'm not disappointed, either, because I don't think I left anything out on the road."

However, with the second of two places on the Belgian squad for the individual time trial at next year's Olympic Games in Tokyo still up for grabs – Deceuninck-QuickStep's Remco Evenepoel has the first – it's looking increasingly as though it may go the way of Van Aert.