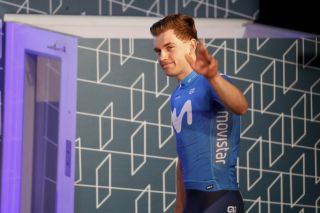 Britain's Gabriel Cullaigh will ride the 2020 Tour Down Under with Movistar (Image credit: Photo Gomez Sport)

British WorldTour neo-pro Gabriel Cullaigh will make his debut with Movistar at the Tour Down Under in Australia, kicking off his 2020 season early along with fellow new signings Juri Hollmann of Germany and Sergio Samitier of Spain. Also in Movistar's seven-rider squad are Jürgen Roelandts, Edu Prades, Lluís Mas and Jorge Arcas.

Movistar have opted for a more gradual season debut for new team leader Enric Mas and veteran Alejandro Valverde. Both are expected to race in Movistar's new dot fade blue jersey at the Challenge Mallorca races at the end of January.

Cullaigh, 23, will perhaps have a free hand to test his form and sprint speed at the Tour Down Under. He finished fourth behind Andre Greipel, Caleb Ewan and Fernando Gaviria in the opening stage of the 2018 Tour of Britain and caught Movistar's attention by winning three stages of the Volta ao Alentejo in Portugal.

Cullaigh to turn pro with Movistar

Richie Porte 'in good shape' for more Tour Down Under success

Cullaigh also finished third in the U23 Gent-Wevelgem in 2016 and joined the SEG Racing development team in 2017. He underwent surgery to resolve breathing problems and he returned to Britain with Team Wiggins for 2018 and 2019.

He is only the third Briton to ride for the Spanish squad in their 40-year history, after Jeremy Hunt and Alex Dowsett.

The men's Tour Down Under begins on January 19 with the warm-up criterium, with the stage race held between January 21-26.

The 2020 Tour Down Under will once again feature Willunga Hill on the final day of racing, with organisers keen to keep the suspense and excitement going to the last day of racing of the opening WorldTour race of the season.

How to watch the Tour Down Under

The Tour Down Under will be broadcast on Seven in Australia, on NBC Sports in North America, and on Eurosport in Europe.