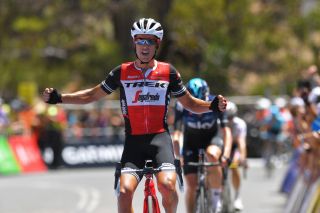 Richie Porte believes he’s on track for a seventh straight victory on Willunga Hill and a second overall title at the Tour Down Under, where he’ll lead the line for Trek-Segafredo alongside world champion Mads Pedersen.

The Tasmanian has started his past six seasons at the Tour Down Under and, while he has won the key climbing stage in each of those years, he has only won the race outright once, in 2017, with time bonuses in sprint finishes often decisive. Porte placed fourth overall in 2014, and runner-up in the other years. Daryl Impey (Mitchelton-Scott) beat Porte by 13 seconds in 2019.

Porte’s success on Willunga last year turned out to be his only victory of a disappointing debut campaign with Trek-Segafredo, and he’ll be hoping for better as he prepares to turn 35 at the end of January. Either way, he feels in good shape to kick off his season as he usually does.

"I haven't changed much in my build-up; I've been training in Tasmania on familiar roads, and it's worked in the past," Porte said.

"I think I'm arriving in good shape, and we're going to have a pretty strong team, so I'm looking forward to getting the race and the season kicked off in Australia."

The route for the 2020 Tour Down Under may tip the balance back in Porte’s favour.

Willunga Hill has been the only summit finish in the past two years, and Daryl Impey has been able to use bonus seconds picked up in the selective sprints to win the overall title. However, the 2020 route features two uphill finishes, with a climb to Paracombe on stage 3 followed by Willunga Hill, which is, for a second year in a row, the final act of the whole race.

"The fact that we've got the climb up to Paracombe this year and also Willunga on the last stage is a good thing for me - it's kind of the same course as in 2017 when I won the race," Porte said.

"It's always nice to start the season in Adelaide. Being from Australia, it's a big motivation to come and race in front of the people that normally stay up until after midnight to watch the racing in Europe. It's so nice to come and meet some of those fans."

Alongside Porte, world champion Mads Pedersen will make his 2020 debut and will line-up in the rainbow jersey for just the fourth time, after three end-of-season appearances last year. The Dane will have opportunities in the flatter earlier stages.

In the hillier stages later in the race, Porte will be supported by new signing Kenny Elissonde, alongside youngsters Juan Pedro Lopez, and Michel Ries, who are making their professional debuts. Rounding out the team are Kiel Reijnen and road captain Koen de Kort.

"Our ambition and ultimate goal is to fight for the victory with Richie Porte, our team leader and GC contender. The course is more favorable to Richie this year with two uphill finishes on Stages 3 and 6. We bring a strong and motivated squad to support Richie, specifically in the key stages," said director Kim Andersen.

"Kenny has done well in the past in TDU and will play an important role. Neo-pros Juan Pedro López and Michel Ries will also aim to give good support in the hillier terrain. Mads will have a free run for the sprints in the first two stages but will then commit 100 per cent to the team's goal of winning the race overall."

In the women’s Tour Down Under, Trek-Segafredo will be led by the US duo of Tayler Wilse and Ruth Winder, who finished 10th overall last year, while Lotta Henttala (née Lepistö) will target stage victories in the sprints.

The four-stage race starts and finishes with bunch sprint opportunities, but a late climb on stage 3 and an uphill finish in Stirling on stage 4 are set to shape the general classification. The women's Tour Down Under runs between January 16-19 The men's race is from January 21-26.

"Tour Down Under is always an early race where you ride against in-form Australians. We have put a good team together to be able to fight for a high GC standing with Tayler and Ruth. Lotta will make her return to competition after a challenging 2019 plagued with injury and we will support her in the sprints," said director Ina-Yoko Teutenberg.

"The race has changed a bit and there are no mountain top finishes so tactics will play a bigger role. This route also opens up the race to more contenders, and with those opportunities on the line, I believe we will witness some good, aggressive racing."

The Trek-Segafredo squad is rounded out by Anna Plichta, Trixi Worrack, and Abi Van Twisk.

Trek-Segafredo for Tour Down Under

How to watch the 2020 Tour Down Under

The Tour Down Under will be broadcast on Seven in Australia, on NBC Sports in North America, and on Eurosport in Europe.