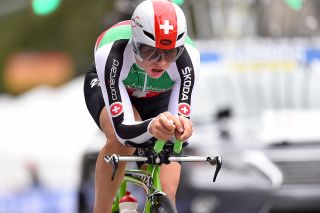 EF Education First announced Thursday that they have signed Swiss talent Stefan Bissegger on a three-year deal that will begin in August of 2020. Bissegger, 20, is aiming represent his country in the men's Team Pursuit at the Tokyo Olympic Games before making his WorldTour debut.

"We made the deal to start for August 1 because of the Olympics," said Bissegger in a team press release. "I'm all in for the Olympics, for the team pursuit on the track. The qualification period runs until March next year, after the Track World Championships, and the team is allowing me to focus on that."

Bissegger has been racing on the road since the age of 10 and continued through the junior category until he turned 19 last year. As an under-19 athlete, he combined his interests on the road with track racing.

"From there, I developed with both disciplines," Bissegger said. "I love them both, but I need to go all in on the Olympics to get there. Switzerland has a good team. We work well together, and we all want to qualify together."

On the road, Bissegger won a stage at the Tour de l'Avenir and the opening stage at Tour de l'Ain in May.

"Andreas Klier, one of our directors, pointed him out to me," said EF Education First CEO Jonathan Vaughters in a team press release. "We watched his Tour de l'Ain stage win on YouTube – it was truly impressive.

"He's a huge talent, and a guy who could get a great result at U23 Worlds," Vaughters said. "He's young, and he has a high ceiling in terms of what he can accomplish.

Bissegger said that he hopes to develop his strengths with EF Education First in part because of the team's partners.

"I did an apprenticeship as a bike mechanic," he said. "I worked in a shop that carried Cannondales, and I'm a big fan of the bikes. Peter Sagan was a big hero of mine, and he rode for the Cannondale team, and I always dreamed of joining the team – first Cannondale, then Cannondale-Garmin, now EF Education First.

"I also like the color pink," he added. "I'm happy to wear this color soon."