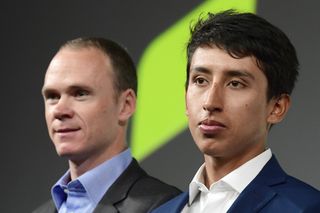 Egan Bernal is yet to make a decision on his Grand Tour plans for 2020, but described the recently-unveiled route for the Giro d’Italia as "really special" and also claimed it would be a "big honour" to help his teammate Chris Froome win a record-equalling fifth Tour de France title.

Bernal finds himself with something of a dilemma. Returning to the Tour de France as defending champion with number one on his back is an obvious draw, but he clearly likes the route of the mountainous Giro d'Italia and has strong links to Italy, having lived there when he first moved to Europe.

The 22-year-old Colombian won the Tour de France this year after being forced to miss the Giro d’Italia with a collarbone injury, while Froome was ruled out of the Tour in a June crash from which he is still recovering. Team Ineos also have 2018 Tour winner Geraint Thomas and 2019 Giro winner Richard Carapaz to factor into the 2020 Grand Tour conundrum. The planning and decision making process will begin now the routes for both Grand Tours are known.

After traveling to Paris last week to witness the presentation of what he described as “a good Tour de France for a good climber”, Bernal was en route to Japan for the Saitama Criterium when the Giro route was unveiled in Milan on Thursday. With three individual time trials, totalling 58.8km, set-piece high-mountain stages in the final week, and 10 stages above 200km, it seems the antithesis to the Tour’s festival of short stages and constant climbing.

"The parcours for the Giro is really special," Bernal told Cyclingnews in Saitama.

As for whether it’s as well suited to him as the Tour: "At the moment it’s difficult to say. Maybe I will lose a bit of time in the three time trials, so that makes it difficult for me, but on the long stages and long climbs I can do well if I have a good performance."

He’d hoped to ride the Giro during his time with Androni-Giocattoli, but Gianni Savio’s team were denied a wildcard invitation in 2017. Given he was also set to line up this year, before the collarbone break, a corsa rosa debut is long-awaited.

"For sure, I want to go back to the Tour, but I’d also really like to ride the Giro,” he said.

"I don’t want to take a decision now or start thinking about one race, because I don’t think that’s a good at the moment to be thinking ‘I will do the Giro’ or ‘I will do the Tour’. At the moment, I prefer not to think about that.

"I think the team are already talking about it between them, and then with me and my coach in the next weeks. We should have a more clear picture in December, normally, but for now I don’t want to start talking about it and asking them, because I’m resting and I prefer to enjoy that than think about next year."

Doubling up and deciding leadership

Doubling up with the Giro and Tour could well be a possibility. In his first two seasons with Team Ineos, Bernal has ridden the Tour de France as his sole Grand Tour of the season, but he will already be seen as mature enough to handle two three-week races in one campaign.

"The past two seasons I prefer to do just one Grand Tour, but maybe next year I would like to do two. It depends how I finish the first Grand Tour I do," he said.

"Maybe if I go to the Giro and I’m really tired, I will not go to the Tour. But if I’m fresh… well, not fresh, but if I feel I can go to the Tour – maybe to help or to try to do GC – for sure I will ask the team to go. It depends how I feel at the end of the first one I do."

The idea of returning to the Tour de France in a support role, is one that has been raised by Froome himself. The 34-year-old has won the Tour four times and is chasing a fifth title that would draw him level with Eddy Merckx, Jacques Anquetil, and Bernard Hinault, but is still in the relatively early stages of his recovery from the June crash that left him with a broken femur, sternum, elbow, and vertebrae.

Earlier this month, Froome claimed Bernal was willing to support him at the 2020 Tour, and Bernal confirmed that, albeit with the same caveat of it depending on who's stronger when the time comes.

"Froome, I think he’s the best, I have a lot of respect for him. For me, it would be a big honour to help Froomey to win his fifth Tour, if he’s in a better condition than me," Bernal said.

The idea that leadership will be assigned by default, according to who emerges as the strongest rider, is something that will apply across the board at Team Ineos next year.

"The relationship between us all is good – or at least I myself have a good relationship with them all. With Carapaz it’s really easy because we speak the same language, our countries are really close and we have more or less the same culture, so it’s easy to understand each other. With G it’s also really good – this year in the Tour he was really calm and always really easy.

"We cannot start to think now about who will be the leader. In the end, whoever is the best on the road will be the Team Ineos leader."