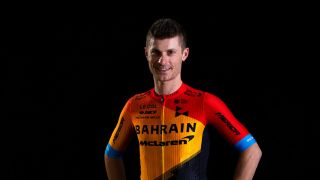 Enrico Battaglin has signed for Bahrain McLaren for the 2020 season. The Italian, who raced for Katusha-Alpecin last season, had been linked with a move to Bahrain-McLaren throughout the winter and attended the squad’s training camp in Croatia in December.

Battaglin announced his switch to Bahrain McLaren on social media on Friday afternoon and his new team confirmed that he is the 29th and final rider to be added to its 2020 roster.

“I am excited to join Team Bahrain McLaren,” Battalgin wrote on Instagram. “2019 season was not my best year, so for the coming season, I want to get back to my top level. Team Bahrain McLaren is the perfect team for me and I look forward to being part of the family; bringing success for my team-mates and the staff.”

Battaglin turned professional with Bardiani-CSF (then Colnago-CSF) in 2012 before moving up to WorldTour level with LottoNL-Jumbo in 2016. After three seasons with the Dutch squad, he joined Katusha-Alpecin in 2019 but was left without a team following its merger with Israel Cycling Academy.

A strong puncheur, Battaglin has won three stages on the Giro d’Italia during his career. In 2013, he claimed an uphill sprint in the rain at Serra San Bruno, before outkicking the breakaway on the summit finish at Oropa twelve months later. In 2018, Battaglin was victorious on the uphill finale at Santa Ninfa in Sicily.

“Enrico Battaglin completes our 29-strong selection,” Bahrain McLaren manager Rod Ellingworth said in a statement. “We are happy with such a versatile and driven talent who has proven himself several times. We look forward to fulfilling more of his potential.”

Bahrain McLaren’s roster has undergone a significant overhaul for the 2020 season following the departure of Vincenzo Nibali to Trek-Segafredo. Ellingworth has taken over as team manager, while new arrivals include Mikel Landa, Wout Poels and Mark Cavendish.