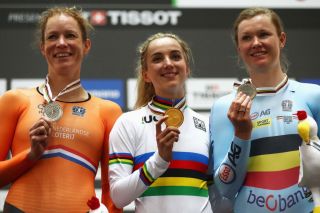 Olympic and world champion Elinor Barker will return to track racing at the upcoming UCI Track World Cup held from from November 8-10 at the Sir Chris Hoy velodrome in Glasgow. Barker was part of the quartet – along with Laura Kenny, Joanna Rowsell Shand and Katie Archibald – that won women's Team Pursuit at the Rio Olympic Games, and is targeting a second gold medal in Tokyo next summer.

"Whereas in most years we'll have track and road, and if one thing isn't going so well you know there's another race coming up, next year there is one very important race. There's not a lot to take your mind off it, so what's stressful is also what makes it special, and you kind of have to take both together."

Barker, who competes in both road and on the track, suffered a broken collarbone after a crash at the end of the RideLondon Classique in August, and has fully recovered ahead of the track season.

In Glasgow, Barker will be joined by Archibald along with Ellie Dickinson and Neah Evans, both of whom - along with Archibald - retained their European Team Pursuit title earlier this month.

The women's Team Pursuit squad will compete in the World Cup series that starts in Minsk, Belarus on November 1.

"We know that we could do exactly what we've done previously and record exactly the same time, but that wouldn't necessarily represent the same medal, so we have to up our game. We want to keep stepping up, going up a level and getting faster, so we can't just do what we've done before and assume it'll work again."

Barker will also compete in the Scratch Race in Glasgow, an event where she is the reigning world champion. She said that she's looking forward to racing in the rainbow jersey next month.

"I have a particular affinity with Glasgow, because that's where I competed at my first ever world cup (in 2012). I was 18 and still in school, and I got the opportunity to race the first team pursuit after the London Olympics, which was mad – probably the most ridiculous thing I've ever experienced.

"I'd gone straight from doing junior races in front of 12 people – three of whom are your family – to suddenly having an entire stadium of people who all know your name and are all behind you. It was quite a surreal start to my career, so going back to Glasgow is quite special to me.

"All being well, fingers crossed, this time in Glasgow I'll be racing in front of a home crowd in a world champion's skinsuit, and that's kind of as good as it gets, really."

In the Glasgow round, British cycling will also field a women's sprint team that will include Lauren Bate, Sophie Capewell, Katy Marchant and Milly Tanner.

The British team opened the track season with nine medals at the recent UEC European Championships in Apeldoorn. However, Stephen Park OBE, British Cycling's Performance Director said there were areas that needed improvement, particularly heading into the Tokyo Olympic Games.

"It was a great start but it did highlight some areas we need to work on in order to achieve our ambitions of topping the medal table once more in Tokyo 2020," Park said.

"With just 269 days to go until the Olympics begin, our focus is now fully on those riders we believe will be medal competitive in Tokyo, and we have selected the team for Glasgow and Minsk (the world cup round before Glasgow), accordingly.

"As such, we have entered strong teams into both events as the early rounds of this season's world cup series will be crucial for us.

"I'm expecting to see some fast and impressive performances from the Great Britain Cycling Team in Glasgow. What really helps lift the team is having the home crowd support, so Glasgow will be particularly important and I look forward to having the support of a full house behind us."