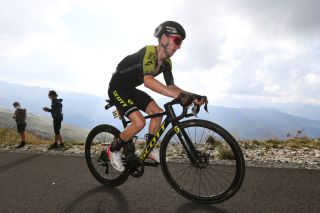 Mitchelton-Scott's Adam Yates was able to retain his fifth place overall at the Tour de France on Wednesday following what was a tough finale to stage 17 on the Col de la Loze, where Astana's Miguel Angel Lopez took the victory and Jumbo-Visma's Primoz Roglic extended his overall lead by putting time into Tadej Pogacar (UAE Team Emirates).

"It's one of the first climbs that we've had that was really at altitude, so it was a tough day," Yates said of the 2,304-metre-high Col de la Loze – the highest point of this year's race. "I held on as long as I could, so I've got to be happy with that.

"Once we got into that last seven-kilometre section, we actually went pretty easy for that first bit," he explained on his team's website. "I think everybody was saving; they didn't really know what to expect.

"UAE Team Emirates then started riding a really hard pace, and from then on it was every man for themselves. I just hung on for as long as I could," Yates said.

It all leaves Yates still in fifth place, nine seconds behind Porte and 10 seconds ahead of Uran, with another tough day in the Alps to come on Thursday – the 175km 18th stage from Méribel to La Roche-sur-Foron – where the GC is certain to be shaken up once more, despite what is a downhill finish.

Friday's stage should then provide an opportunity to the breakaway specialists or sprinters capable of getting over the smaller climbs that feature on stage 19 from Bourg-en-Bresse to Champagnole, and then Saturday's mountain time trial, which finishes at the top of the climb of La Planches des Belles Filles, will decide this year's Tour – and the final places on the GC.

"We’ve got a big stage tomorrow [Thursday] with a lot of altitude metres, so it will be a tough day," said Yates. "And then, after that, all we've got is the TT, so we've got one big day left in the mountains, and then one day all by myself. Hopefully tomorrow I have good legs and can keep trying."

Yates came into the 2020 Tour de France stating that his goal was to try to take stage wins, but found himself in the yellow jersey as race leader at the end of stage 5 after Deceuninck-QuickStep's Julian Alaphilippe lost the lead as a result of being handed a time penalty for taking a drinks bottle inside the final 20km.

The 28-year-old then kept the maillot jaune until stage 9, when it was taken by Roglic – who's held it ever since – although Yates hasn't dropped out of the top eight overall at this year's Tour since stage 2.