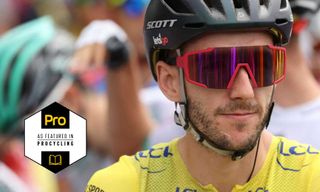 Before August, if you had been asked to name the British rider who would spend time in the yellow jersey at the Tour de France, you'd have said Geraint Thomas. At a push, you might have predicted that Chris Froome had returned well from his injuries, or thought that Simon Yates changed his programme due to the pandemic.

Even with the absence of Thomas, Froome and Simon Yates, very few would have predicted Simon's brother Adam Yates would spend four days in yellow at an incredibly tough Tour, and be in the top 10 at the end of the first week.

Adam finally lost the yellow jersey on Sunday when the favourites attacked on the Col de Marie-Blanque. The quartet of Pogačar, Roglič, Bernal and Landa distanced the next group of six, and Yates found himself in the next group after that, along with Miguel Ángel López and Enric Mas. He is now eighth at 1:02.

The less-heralded Yates brother, and the younger by about five minutes, Adam has not managed to match Simon in Grand Tours since finishing fourth and winning the white jersey at the Tour de France in 2015.

While Simon won the Vuelta a España in 2018, and has won seven stages in three-week races, Adam has only twice finished in the top 10, and hasn't managed to win a stage.

He is still a very successful rider, though, with his performance at the curtailed UAE Tour earlier this year being a sign of things to come. That had followed second places at Tirreno-Adriatico and the Volta a Catalunya last year. He also won Clásica San Sebastián in 2015, and was the first of the brothers to win a stage race, at the Tour of Turkey in 2014.

Mitchelton-Scott claimed to be hunting for stages at this year's Tour de France, yet they have been prominent at the top of the general classification since stage 2.

Despite gaining the yellow jersey in unusual circumstances - Julian Alaphilippe's time penalty – few could argue that Yates didn't deserve to wear it, especially after he managed to hold on to the favourites, apart from Tadej Pogačar, on the Col de Peyresourde on Stage 8.

There are many reasons to like the 28-year old from Bury. His unassuming presence might not give him the biggest media profile, especially over some of his more extroverted peers, but he remains an intriguing prospect at this Tour de France and in the future. His habit of hanging around at the back of the peloton, even when in the leader's jersey, marks him as a kind of maverick, prepared to do things his own way. He has been called "the shadow" for his habit of slinking around in the bunch without showing himself, which proved a bit tricky when in the yellow jersey.

Yates has a punchy power though, which makes him suited to attacking, rather than defending, and again makes him an easy rider for fans to like. It's why a lot of pundits have always thought of him suitable for the Ardennes classics more than Grand Tours.

While Simon was given a direct route into cycling, with the Great Britain U23 team, Adam was forced to take a more traditional route, riding for cycling clubs in France. Later, when looking for professional teams, Simon was courted by what was then Team Sky, while Adam was not wanted, which led to the pair signing for Orica-GreenEdge.

Again, his nature as more of an outsider against the establishment makes him an attractive figure. One wonders how this will fit in at Ineos Grenadiers, where Yates will be racing next season, and their more conventional setup.

The Yates brothers might be less famous than their Bury-born counterparts, the footballing Nevilles, but they have the potential to make just as big a mark on their own sport. At 28, both Adam and Simon should be entering the best years of their career – one wearing the leader's jersey at the Tour de France might well be followed by the other wearing it at the Giro d'Italia next month.

Yates may have lost control of the lead towards the end of Stage 9, conceding more than a minute to Primož Roglič but his time in yellow certainly reminded everyone of his capabilities, on the eve of his move to Ineos Grenadiers, where he will hope to be more than just a foot soldier. On this evidence, he has the power to challenge for leadership at races.

As for the rest of the Tour, it will be interesting to see whether he continues to challenge for a top-10 spot – no mean feat – or goes for stage wins instead. Either way, he has entered an elite club, as the ninth British rider to wear the maillot jaune.