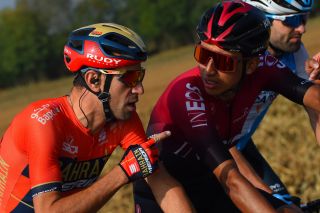 The 2020 season is only a few weeks old, but when it comes this year’s Grand Tour contenders, there has been no shortage of column inches and articles devoted to their form, results and overall aspirations.

Even though Chris Froome, Thibaut Pinot, Geraint Thomas, and Primoz Roglic haven’t raced, that hasn’t stopped those debating the possible fortunes of Tadej Pogacar and Egan Bernal after their first racing forays of 2020.

However, if there's one conclusion to be made from the first weeks of a new season, it's that each year kicks off in the same manner and, as ever, we all get sucked into the excitement.

Yet, drawing conclusions in January and February is a risky business.

Philippa York: Would I have ridden for Team Ineos?

The early skirmishes, in what will be a long campaign, take on an importance way beyond what will really matter in the final reckonings of May and July. But, as is usually the case with the southern hemisphere races, their appeal and fair weather create a bubble that exaggerates their true importance.

The Australian races – such as the Tour Down Under – are dominated by what you might consider ‘locals’, or those used to the conditions. That's not to say there aren't some minor lessons to be learned, but it’s the Classics riders and those seeking early season form who should be monitored closely at this stage. Grand Tour riders being dragged around by early-season form getters is merely a subplot in a long unwritten narrative.

Basically, if you're a team leader for either the Giro or the Tour, this time of year means you aren't expected to be on top form. That said, and here's the rub, you are expected to survive up until the final few attacks before the winners make their key moves. What the team management wants to see is that their stars have got the basics right over the winter – the hard graft from October to early January. When you're the rider in that position, it's what you want to see, too.

There's nothing worse than starting a season playing catch-up, a lesson learned the hard way by many Grand Tour winners who got sucked into celebration dinners and award ceremony canapes.

Three and four-day stage races, at this point in the campaign, are the best way of easing back into competition mode and, if you've done your homework, these races will not have adverse effects on your fatigue. They’re short enough to test you but not long enough to put your body through undue strain.

For Dumoulin and Froome, these early races can typically be ridden with far less pressure and, in the case of the Dutchman, any hint of illness can be overcome without too much panic or alteration in terms of his race programme.

However, both Froome and Dumoulin need to find their rhythm of racing again, build up their confidence, and re-assure everyone – themselves included – that they still have all the faculties needed to be competitive again. It’s perhaps more acute for Froome, given his injuries from last year’s Critérium du Dauphiné were more severe than Dumoulin’s, but when you have been badly hurt and had time out from the peloton it's not always easy to get back into the cut and thrust of racing.

Both of them will have been slightly forgotten by their colleagues and, although they'll get a certain amount of respect by way of previous results, the pro cycling world is a much nicer place when you are performing and in the front. Below that level, there's a constant supply of new talent looking to progress and they show no mercy.

Another good thing about these early events is that, even though you might be missing top-end power, as long as you feel strong and healthy then most issues are fixable.

One aspect that does take a few races to rediscover is reaction time, and it can be a bit of a shock to the system to see just how edgy racing can be when everyone is eager to be in the front or prove themselves.

It's all very well training with the team in a large group but racing is way more nervous and the number of crashes in the opening events is testament to not everyone having learned what their limit is in terms of bike handling, and also who is crazier and best avoided when the fighting for position kicks off.

Any change in equipment takes time to adjust to, as well. So if you've moved teams or a new supplier has come in, you need to build up your knowledge of how a product feels during racing.

It could be tyres, wheels or a different spec of braking system. The difference between suppliers is very small but sometimes certain things freak you out, like when I changed from Clement tyres to Vittorias during one winter break. The grip was the same, they didn't puncture any more or less, but the Vittorias would squeal under certain cornering conditions when the Clements stayed silent. That’s not something you want to be dealing with and wondering if you’re not safe or not. Hurtling into a downhill corner in the middle of the peloton isn't the ideal time to discover the ultimate characteristics of your latest equipment, either.

It's been interesting to note that the new generation of stars, like Remco Evenepoel and Tadej Pogacar, have hit the season in top form, which is hardly surprising given that they are still on the path of forging a reputation and discovering where they are situated in the hierarchy.

Compare that to the riders that they will ultimately replace as the established team leaders, and the stress the older guys are willing to put themselves under during this opening period is considerably less. They already know what works for them, when to back off and when to push themselves. Their respective teams will have worked out a suitable program to bring them into form when they are required to be in the front.

Things get a bit more complicated when guys have changed teams – as is the case for Dan Martin and Vincenzo Nibali, for example – as it can be a bit more nervous for rider and team until there are glimpses of form. Essentially, however, racing in January and February is for the young guns and the Classic specialists. The former want to prove how good they are and the latter need to sharpen up their weapons for the coming battles.

It's more than likely that both camps will have been training seriously since November, with their first major objectives in March or early April. That can be way too soon for anyone who is looking at the Giro or the Tour as a target.

Sure, there'll be exceptions but, in general, what you give now in terms of energy and commitment is something you can't give later so, although these races are important in the grand scheme of racing, they don't matter too much yet.

That might seem a fairly relaxed position for Grand Tour team leaders to be in, and it is, up until the point where no one from their squad has won one of the opening races. Then the questions start, the doubts creep in, and the fingers are pointed.

At least at teams like Deceuninck-Quickstep and Jumbo-Visma there'll be none of that. Well, not until the Classics start, anyway.