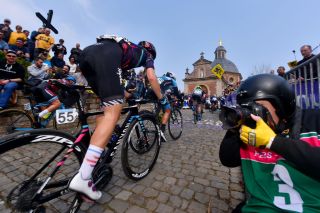 Canyon-SRAM can trace their lineage back to the T-Mobile squads of the early 2000s, with the women's team eventually morphing into Team Columbia, HTC-High Road, Specialized-lululemon and Velocio-SRAM – and also swapping country of registration back and forth between Germany and the US.

The latest incarnation, which took shape in 2016 and has remained constant ever since, is now a German-registered Women's WorldTour team.

The 2019 squad, which will return intact for 2020 with the addition of 22-year-old Australian Jessica Pratt, brought home 16 wins over the course of the season, including high-profile victories at the Healthy Ageing Tour, the Amstel Gold Race, the Giro Rosa team time trial stage and the BeNe Ladies Tour, among others.

Twenty-three-year-old German Lisa Klein led the way for the team, starting her run of success with overall victory at the Healthy Aging Tour, then adding stage wins at the Lotto Thüringen Ladies Tour, the Boels Ladies Tour and the BeNe Ladies Tour, where she also won the overall. Klein also added a German time trial title to her 2019 palmarès.

Polish star Katarzyna Niewiadoma added the win at the Amstel Gold Race in dramatic fashion, then contributed a victory on stage 4 of the OVO Energy Women's Tour in the UK. Other winners in 2019 included Italian Elena Cecchini, Rotem Gafinovitz, Omer Shapira and Alice Barnes. Missing from the win column in 2019 were Tiffany Cromwell and former world champion Pauline Ferrand-Prevot, who was recovering from Iliac artery surgery.

Lisa Klein: In the absence of Pauline Ferrand-Prevot, who was recovering from surgery, and in the face of an off year from Tiffany Cromwell, Klein stepped up as the results-getter for Canyon-SRAM in 2019 and should stay on track heading into 2020.

Despite a palmarès that already includes overall wins at the Healthy Ageing Tour and the BeNe Ladies Tour, the 23-year-old is still coming into her own in the women's peloton and will likely be adding considerably to her personal win column this season.

Katarzyna Niewiadoma: The 25-year-old Polish rider already has 25 checks in the win column, although her second year with Canyon-SRAM in 2019 saw her add only two more. Niewiadoma chose her spots well, however, grabbing a spectacular win at Amstel Gold and then winning stage 4 at the OVO Energy Women's Tour.

When she wasn't seizing the podium's top step, she was battling for wins and podium places at races like Strade Bianche, where she was third. She also finished in the top six at the Tour of Flanders, Liège-Bastogne-Liège and Flèche Wallonne. With fate and/or luck swinging just slightly in a different direction, Niewiadoma could easily be adding multiple Classics to her palmares in 2020.

Elena Cecchini: The 27-year-old Italian won stage 6 of the Lotto Thüringen Ladies Tour from a group of three that included American sprint ace Coryn Rivera (Team Sunweb), then added the Italian time trial title at the end of the year. Cecchini is also a strong Classics rider who was fifth at the Trofeo Alfredo Binda, eighth at Gent-Wevelgem and fourth at the Dwars van Vlaanderen.

She just missed out on the European Championships road race win, finishing second in a three-up sprint from a breakaway group with race winner Amy Pieters (Netherlands) and third-placed Lisa Klein – her Canyon-SRAM teammate who was representing Germany in the race – and is another Canyon-SRAM rider who is always at the pointy end of races, and could break through with multiple wins.

Tiffany Cromwell: The 31-year-old Australian is back for another year with Canyon-SRAM after moving to the then Specialized-lululemon programme in 2014. The 2013 Omloop Het Nieuwsblad winner has also won stages at the Giro Rosa, the Tour de Feminine en Limousin, La Route de France and the Lotto Thüringen Ladies Tour, the last of which came in 2017.

Cromwell has moved into a mentorship role for the younger riders on the team, but the steady road captain is still capable of pulling out a winning ride if the opportunity presents itself.

Canyon-SRAM is a well-rounded team that can be a force in the one-day Classics early in the season and in the stage races that come later in the year. The team races aggressively, which puts them at the forefront of the women's peloton and often on the top step of the podium, but that racing style can sometimes hurt consistency.

It's a trade-off for panache over placings, and it gives the team an exciting flare. Klein is an obvious bright spot for the team, and Niewiadoma continues to progress as a leader within the tight-knit group that has been together for several seasons.

Look for the attacking Polish rider to further consolidate her leadership role this year and have it pay off with more results, while Klein will continue to establish her place as one of the top women riders.

Fourth place in the Women's WorldTour team rankings is an admirable result, but more consistency could help the team climb higher – if that's what they want, as the eight WorldTour status teams rise to the top of the sport.

Just one win in the spring Classics doesn't reflect the team's all-in style and race-at-the-front attitude, however, and they need to figure out how to get their brightly-coloured kits on the podium's top step in those high-profile races more often.

Their efforts will suffer a further setback with the revelation that Ferrand-Prevot needs further iliac artery surgery after a solid comeback during her recent cyclo-cross campaign.

This long-running women's programme is testament to the durability of good sponsors and steady leadership and deserve their place amongst the new women's WorldTour teams.

The team came out with dynamic new kits in their purple-based colours for 2020, and one gets the sense that the riders are ready to step things up to a new level with Klein and Niewiadoma at the helm.

They were knocking at the door of a truly remarkable season in 2019, and it would be exciting to see them turn into the Boels Dolmans slayers of the peloton in 2020.