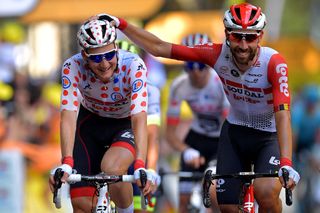 Tim Wellens – in the polka-dot jersey as the 'king of the mountains' leader – and Lotto Soudal teammate Thomas De Gendt share a joke on stage 11 of the 2019 Tour de France (Image credit: Getty Images)

Lotto Soudal's Tim Wellens got a little more than he'd bargained for when he attempted to negotiate a snowy off-road descent on his bike in the Spanish Montañas Vacías range, with his subsequent crash captured on film by teammate and co-adventurer Thomas De Gendt, who couldn't quite contain his amusement.

In a Twitter post captioned "When you think you found a shortcut", De Gendt uses his helmet cam to film his friend Wellens negotiating patches of snow on a grassy and rocky slope before he hits a new patch of snow, applies his brakes, and gently goes over the handlebars of his fully laden bike, landing in the snow, and eliciting laughter from De Gendt.

De Gendt and Wellens complete their Italy to Belgium ride

Wellens and De Gendt and currently taking part in what they've called 'The Final Breakaway 2' – a sequel to their Final Breakaway six-day cycling road adventure from Italy to Belgium following one-day Classic Il Lombardia in 2018.

The start of their latest bike-packing trip had to be delayed due to Wellens' bike being damaged on their flight to Spain and due to De Gendt falling ill, but they managed to get under way on Saturday, and will make the trip over four days – rather than the originally planned six – having started further along their route to Valencia, which they hope to reach by Tuesday evening.

De Gendt this week put his name forward for consideration for Belgium's second and final time-trial place at the 2020 Tokyo Olympic Games, saying that he'd improved a lot against the clock during the 2019 season, during which he finished third in time-trial stages at both the Giro d'Italia and the Tour de France, and that he was "prepared to pay even more attention" to the discipline next year.