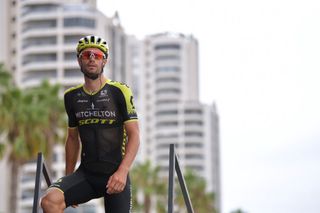 A late crash in the Vuelta a España's stage 14 saw several favourites including Alejandro Valverde (Movistar) and Tadej Pogacar (UAE Team Emirates) go down, whilst Luka Mezgec (Mitchelton-Scott) was taken to hospital in an ambulance.

The pile-up came in an uphill section just inside the last kilometre in the streets of Oviedo as the sprinters were massing for one of the few opportunities in this year's race. Dozens of riders were either entangled in the crash or held up immediately behind.

It was unclear who had caused the crash on the lefthand side of the road. The crash happened close to the front of the bunch but did not affect the progress of Sam Bennett (Bora-Hansgrohe) towards his second stage win of this year's Vuelta.

The crash rippled across the width of the road as a wave of riders tried to avoid falling but then toppled over others already on the tarmac.

Sprinter Mezgec came off the worst, and was then taken to hospital in an ambulance. The official Vuelta medical bulletin later said Mezgec had suffered blows to his hip and right elbow and was transferred to hospital for further observation.

Owen Douill (Team Ineos) sat up against the side of the crash barriers to receive medical attention, whilst both Pogacar and Valverde were amongst the GC riders who went down. Others who fell included Enrico Battaglin (Katusha), Jorge Cubero (Burgos-BH) and Jon Aberasturi (Caja Rural).

Mezgec had been optimistic before the stage. "There aren't many sprint chances left, so I hope other teams are thinking the same, we try to control a little bit how the day will go, hopefully we can control it to the finish," he told reports before the start of the race. "My legs are getting better every day, and I hope for a nice final for me."

Valverde did not appear too badly affected by the crash, rolling across the line to talk at length to reporters before heading for the team bus. He said that it was not a high-speed crash, and one that everybody could see coming.

"It was an uphill sprint finish, and with all that speed and tension, two riders touched wheels and we all went down," he told the media.

"I'm OK, my wrist hurts a bit, but it wasn't so bad. I hope it doesn't affect me for the stages to come."

Stage winner Bennett said that he had not caught up in the mass pile-up. "I heard a crash but it was behind, then QuickStep were fully organised ready for the sprint, and also UAE were there. It didn't really affect the front of the bunch."

Asked how he had recovered after Friday's mountain stage, Valverde said that he was fine. "I'm feeling good, and apart from this crash, it's been a good day." As for whether he felt more like attacking Sunday or Monday's summit finish, he responded, "right now, what I feel like is getting to my hotel and resting."

Bleeding at one elbow, Pogacar, the race's white jersey holder, told reporters afterwards that he wasn't expecting a stressful stage.

"I didnt' expect so much stress today but the crash was a pretty hard one," he said. "I don't know what happened, but suddenly half of the group was on the ground. I hope everyone is OK, and no serious injuries are sustained by anyone."

Race leader Primoz Roglic (Jumbo-Visma) later said he had had to put a foot down to stop himself from falling, but that he had otherwise been unaffected.