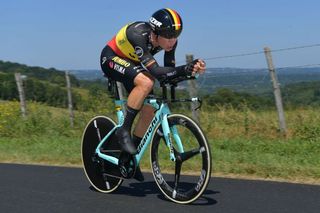 Wout Van Aert rode a bike for the first time since his terrible
crash during the Pau time trial stage at the Tour de France, using an
e-bike for an assisted 7.5km ride near his home in Belgium.

The former cyclo-cross world champion had a dream start to the Tour de
France as part of the Jumbo-Visma team that won the stage 2 team time
trial in Brussels before going on to a stage 10 victory in Albi with
a powerful sprint. He was a favourite to win the stage 13 time trial
but crashed a kilometre from the finish line.

As he made his way through a right-hand corner, Van Aert clipped the roadside barrier, which caught his hip, dug deep into his muscle and violently pulled him off
his time trial bike. He was taken to nearby hospital in Pau, where he
underwent surgery to repair the torn skin, capsule and muscle of his
upper thigh and hip. A week later he went under the knife a second
time in Belgium and was allowed to leave hospital at the end of July.

The 24-year-old Belgian has recently done some work in a swimming pool
but took his first ride on Sunday. He rode just 7.5km for a total of
16 minutes but used an e-bike to ride at an average speed of 27.8km/h
and touched a maximum speed of 57.2km/h. Van Aert posted information
on his ride on the Strava platform, calling his ride: 'Guess what ?!'.

Van Aert admitted that the crash could have ended his career but is
now determined to make a comeback. However, he is unlikely to race
cyclo-cross this winter, prioritising his recovery and long-term road
racing career.

"Taking the stairs is not going well yet, and I also have trouble
walking, but I can now walk a few hundred metres. I can also drive the
car. My life is fairly normal again.”