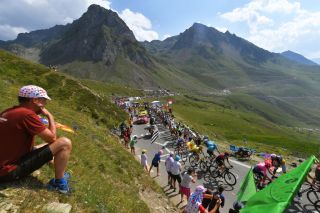 The first WorldTour race is still more than two months away but leading teams are already competing for the best altitude camp locations across Europe as they prepare for the new intense race calendar between August and November.

According to AD.nl, Hotel Parador on the Mount Teide volcano will open on June 21. However teams are unlikely to risk flying to Tenerife, with locations in the Italian and French Alps the preferred destinations for small groups of riders in July and August.

Astana directeur sportif Giuseppe Martinelli told La Gazzetta dello Sport that he drove from his home near Brescia up to Livigno to check out a hotel for his riders as the competition for the best high-altitude training locations heats up. Teams will have to follow a medical protocol currently being drawn up by the UCI and team doctors. It will see riders tested for COVID-19 before heading to training camps and teams divided into small groups or bubbles, with the same staff and riders then following the same race programme to limit the risk of contagion within teams.

Teams preparing for post-lockdown training camps and return to racing

Astana will likely hold camps in Livigno, high up on the Italian-Swiss border, close to the Passo dello Stelvio, at the Sierra Nevada in southern Spain, and at Sestriere in the Italian Alps, only a car drive from Monaco, where many Astana and other riders reside.

"Were looking for something exclusive, a small hotel with 14 or 15 rooms," Martinelli told La Gazzetta dello Sport, so that risk of infection and the need to sanitize rooms and public areas can be kept to a minimum."

Teams are often the only guests for early-season training camps in Spain or Italy but this year, teams will have to compete with local tourists, who are also looking for quiet locations in the mountains, and so distant from any crowds, for their summer holidays.

La Gazzetta dello Sport reports that AG2R La Mondiale have reserved a hotel in Sestriere in July, while Bahrain McLaren are considering locations in Andorra, Passo Pordoi in the Italian Dolomites, Livigno, Austria and Slovenia. Jumbo-Visma is expected to return to Kühtai in Austria at 2,400 metres, while other Monaco-based riders are making plans to stay in Isola 2000 on the French-Italian border.

Tom Dumoulin warned that it is virtually impossible to compete for overall victory at a Grand Tour without the benefits of specific mountain training at altitude, suggesting in March he would change his season goals if he is stuck at home in Belgium.

"You have to have done altitude training before the Tour, otherwise you can't win" Dumoulin told the Wielerflits website.

"We will try to avoid flights as a team where possible, so the car is definitely preferable when we go to altitude."

Fortunately for riders in northern Europe, European countries in the Schengen area are expected to open their borders from June 3 and Jumbo-Visma are planning to drive to the Alps rather than fly. However British-based riders and staff face a risk of enforced quarantine after the British government announced people coming into the country will be obliged to respect a period of 14-day quarantine. Other countries are likely to introduce a similar restriction on Britons travelling to Europe.

The likes of Egan Bernal, Rigoberto Uran, Nairo Quintana are currently at home in Colombia, many living and training at altitude. Their problem is how to return to Europe after the Colombian government grounded all flights until August 31. The many Colombian professional riders are likely to obtain special permission to travel, with La Gazzetta dello Sport suggesting riders will travel to Europe either at the end of June or the end of July, before completing their training for the Tour de France and Giro d'Italia with their respective teams.

Damiano Caruso told La Gazzetta that he will take advantage of living in Sicily to stay at altitude on Mount Etna from next week. Fabio Aru will head to his second home in Sestriere between July 18-August 8. He is currently based in Lugano, with a number of other riders, including Vincenzo Nibali and Alberto Bettiol but Switzerland should soon pen its borders to European travel.

Nibali has been clocking up long rides in the Swiss Alps since returning to full training. Trek-Segafredo has said Nibali will have a largely Italian race programme and target the Giro d'Italia in October. He and his block of teammates and staff are likely to stay in Livigno, Sestriere or at the summit of the Passo San Pellegrino in the Dolomites, where Nibali has regularly stayed in the past before targeting the Tour de France.