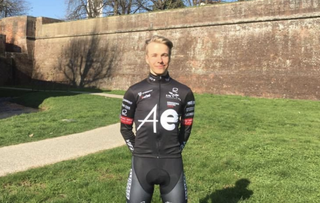 Several members of the former Italian U23 squad Team Altopack-Eppela have been banned for 30 years for various doping offences. The bans come three years after the team's rider Linas Rumšas, son of ex-pro Raimondas Rumšas, died suddenly of a heart attack.

Rumšas under investigation into son's death

A 30-year ban was handed down to Frediani's parents, Narcisso Frediani and Maria Luisa Luciani, whose home was used for doping treatments. Rider and pharmacist Andrea Bianchi was banned for seven years for supplying products without a prescription, while riders Matteo Alban and Niko and Yuri Colonna received four-year bans.

The team first hit the headlines in May 2017 when Rumšas, a former junior national champion, suddenly died at the age of 21. Franceschi, Elsio Frediani and Bianchi were among six people to be arrested in connection with Rumšas' death in February 2018. All those sanctioned are also required to pay fines ranging from €378 to €5,000.

At the time of the initial investigation, launched after the death of Rumšas, police in Lucca said that they had uncovered "a real partnership aimed at facilitating doping practices", adding that Franceschi "recruited the most promising cyclists, motivated them to take drugs, and procured doping substances, including EPO in microdoses".

Three months after Rumšas' death, his older brother, Raimondas Rumšas Jr, tested positive for the growth hormone releasing peptide GHRP-6 in an out-of-competition test. He was later banned from competition for four years.

The Rumšas family is no stranger to doping incidents. Raimondas Rumšas, who rode for Fassa Bortolo and Lampre as a pro, tested positive for EPO in May 2003, less than a year after a surprise third-place finish at the Tour de France.

His wife, Edita Rumšiene was discovered with a haul of doping products, including EPO, corticosteroids, testosterone and growth hormone, in her car on the final day of the 2002 Tour. She was held in jail for over two months months before being released, and in 2006 she and Raimondas were handed suspended four-month prison sentences and fines for their offences.