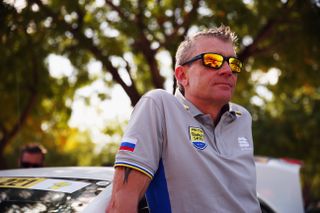 Sean Yates has joined Nippo Delko One Provence as a coach. He linked up with the French ProTeam for the first time last week at a training camp in Moustiers-Sainte-Marie in southern France.

Yates last worked in the professional peloton in 2016, when he was a directeur sportif with Tinkoff-Saxo, which disbanded at the end of that season. The 60-year-old later switched his attention to a coaching business.

"This is the first time I have trained professional riders in a French team, it is a new chapter for me and I am very happy about it," Yates said in a statement released by the team.

"After being contacted by [team owner] Philippe Lannes, I immediately agreed to participate in the team’s project. We have a great motivated team working hand in hand to move in the right direction. With this mindset, we can improve and go very far."

Yates spent the early years of his racing career in France, turning professional with Peugeot in 1982 after a stint with the ACBB amateur squad in Paris. Following a 14-year professional career, he became a directeur sportif, starting with Linda McCartney and later working at iTeamNova, CSC, Discovery Channel and Astana.

In 2010, Yates joined Team Sky for their inaugural season and he was part of the management team that guided Bradley Wiggins to overall victory at the 2012 Tour de France. Yates left Dave Brailsford’s squad at the end of that season, though both he and the team denied reports that he had departed due to Sky’s avowed ‘zero-tolerance’ policy on doping.

Yates returned to professional cycling in 2014 with British squad NFTO before he rejoined the WorldTour in 2015 to work at Tinkoff-Saxo with former CSC manager Bjarne Riis, though the Dane left the team that March.

In a statement on Thursday, Nippo Delko One Provence welcomed the addition of Yates to the performance department, adding: "He coaches six team riders and he is responsible for helping them to give the best of themselves."

The team, which developed out of the VC La Pomme amateur squad, has undergone a restructure during the recent hiatus from racing. Delko owner Philippe Lannes took over as managing owner of the team following the departure of manager Frédéric Rostaing. Last month, José Azevedo, who rode under Yates at Discovery Channel, was appointed a directeur sportif at the team.