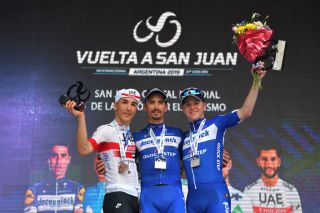 The Vuelta a San Juan has announced that Peter Sagan, Julian Alaphilippe, Fernando Gaviria and Remco Evenepoel will all return to Argentina for the early-season race in 2020. The Vuelta a San Juan is not part of the UCI WorldTour but manages to entice several big-name riders each year, offering a low-key but warm weather start to the season.

The seven stages, held between January 26-February 2, will again be centralised around San Juan in northern Argentina, east of the Andes, with a 15km time trial to the edge of the Punta Negra Dam likely to be decisive, along with the mountain finish to Alto Colorado.

Sagan is not expected to ride the Tour Down Under in Australia and so will likely begin his 2020 season in Argentina. With the Giro d'Italia already on his schedule, he is likely to race less in January and February and March before targeting the Classics in April. The Vuelta a San Juan will also host one of Sagan's Fondo rides on January 30.

Alapillippe finished second overall at the 2019 Vuelta a San Juan behind Winner Anacona (Movistar). The Frenchman laid the foundations for his incredible 2019 season in Argentina and then Colombia and seems keen to follow a similar build-up for 2020.

Evenepoel made his professional debut alongside Alaphilippe but will return in 2020 as an overall contender after confirming his potential with victories at the Clasica San Sebastian, the Tour of Belgium and the European time trial championships. The rolling 15km time trial to Punta Negra Dam could allow him to gain enough time so he can defend any lead on the long climb to  Alto Colorado. Gaviria won two stages at the 2019 Vuelta a San Juan and will return with his trusted leadout man Max Richeze after the Argentinean left Deceuninck-QuickStep to join him at UAE Team Emirates. Gaviria struggled in 2019 due to a knee injury but seemed back to his best when he ended his 2019 campaign with two wins at the Tour of Guangxi in China.

The organisers said Movistar has still to confirm its team leader for the race. However Nairo Quintana will not return in 2020 after moving to Arkea Samsic. He was expected to ride in Argentina but recently confirmed he will make his debut with the French team at home in the Colombia 2.1 race.

Cyclingnews will again be in Argentina for the Vuelta a San Juan, with full coverage of the racing, news and exclusive interviews.