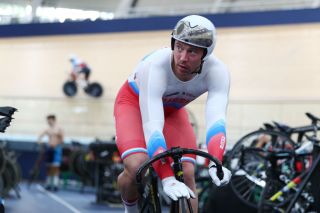 Russia’s Shane Perkins trains at the Anna Meares Velodrome in Brisbane, Australia, ahead of the start of the Brisbane round of the 2019/20 Track World Cup (Image credit: Getty Images)

Track sprinter Shane Perkins, who competes for Russia after switching sporting allegiance from Australia in 2017, says that he hopes to be able to take part in the Tokyo Olympic Games next year under a neutral flag if the World Anti-Doping Agency's (WADA) decision to ban the nation from international competition is upheld.

Perkins, who became Keirin world champion in 2011, gained Russian citizenship in 2017 – and became Russian Keirin champion the same year – after having missed out on selection for Australia for the 2016 Olympics in Rio. He was part of the Australian team at the 2012 Games in London, winning bronze in the individual sprint.

The 32-year-old's aim now is to compete on the track in Tokyo next summer – for Russia or as a neutral.

Russia to decide on CAS appeal of global ban next week

Shane Perkins 2.0: I have the fire back in my belly

"We knew there was a possibility of something like this happening," Perkins told Australian newspaper the Advertiser this week.

"I can't control it; it's out of my hands, and there are some athletes who have inherited this situation to a certain extent," he said. "It's a matter of looking at our options, and, in my case, one of those options is to race under a neutral flag."

According to The Sports Integrity Initiative, the supervisory board of Russian anti-doping body RUSADA will meet on December 19 to discuss whether they'll appeal WADA's decision through the Court of Arbitration for Sport (CAS).

"Sport can be fickle and political. We put a lot of time and effort into a very small moment of our lives like an Olympic Games, and it would be a shame to miss out through no fault of our own," Perkins told the Advertiser.

"At the same time, I have had their support the whole time, and without it I wouldn't be doing what I'm doing," he said of the Russian cycling federation, telling the newspaper that he was happy to continue representing the nation, replying, "No," when asked if he'd never seen anything "untoward".

"I believe in my team," Perkins said. "If I didn't, I never would have come on board, and I've not seen anything that has made me question any of that.

"I am removed from the environment in some sense because I am living in Australia and training by myself," he added, "but at the end of the day, it comes down to my ethics, who I am as a person and what I believe in."