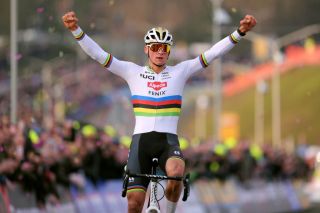 The Dutch cycling federation (KNWU) announced its team for the upcoming UCI Cyclo-cross World Championships, with defending elite men's champion Mathieu van der Poel heading up a 31-strong squad in Dübendorf. One rider was notably absent from the list: Denise Betsema, who recently returned from a doping ban to place second in the Kasteelcross in Zonnebeke.

Betsema, before her ban, was ranked third in the world after winning the Koksijde World Cup in 2018 and nine other victories. She tested positive for an anabolic steroid in last years Hoogerheide World Cup on January 27, 2019 and again at the Superprestige in Middelkerke on February 16, 2019.

Her case wore on until last week when the UCI announced she had been banned for six months and was free to race immediately after arguing her positive had been the result of cross-contamination of her supplements at a pharmacy.

Geerte Hoeke - the top ranked Dutch elite rider behind Marianne Vos, who is out with a groin injury, completed the team.

Betsema told AD.nl she respected the decision. "I respect the selection, because the Dutch women have proven themselves all season," she said.

The elite men will support Van der Poel, who will look to cement his third consecutive world title in Dübendorf on February 2.

"Today Mathieu confirms his status in the World Cup in Hoogerheide and it is no surprise that he hopes to extend his world title," De Knegt said in a federation announcement.

"With women we have four candidates for the world title and that will be an exciting battle. Among the U23 men, Ryan Kamp once again confirms his good form with his second win in a World Cup and is therefore also a candidate for the podium."

The Dutch women are also expected to contend for the rainbow jersey in the U23 Women and Junior Women events. "Inge van der Heijden is on track for the renewal of her world title. Junior women Shirin van Anrooij and Puck Pieterse are also favorites for the title.