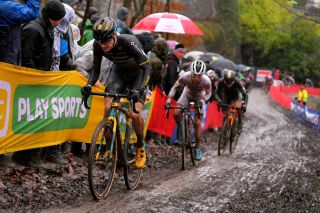 UCI Cyclo-cross World Cup organiser Golazo's new course for the round in Namur had mixed reviews after the lap turned treacherous in heavy rain and cold on Sunday.

The UCI rules for cyclo-cross prohibit "descents of flights of steps", but Golazo turned a section of flagstone stairs into a slope by packing the steps with sandbags and loose sand.

However, by the time the elite men took to the course, the heavy rain and erosion from previous fields racing down the descent exposed the stairs and left a deep hole hole at the bottom that led to several crashes.

Belgian champion Toon Aerts was leading Mathieu van der Poel when he lost his front wheel in the hole and crashed. On the final lap, the errors caught up with Aerts and a bobble and another crash allowed Van der Poel to surge ahead to the win.

Aerts said it was a course for real 'crossers.

"It was a competition with constant changes, and because of the cold and pain I can't even think about what happened. I hope we can think about this later and tell stories about it after our career."

Riders previewing the course last week were surprised to see the changes which Golazo organiser and former cyclo-cross world champion Erwin Vervecken described before the race to Sport.be: "Near the famous descent which has been a big draw for years, there is a beautiful stretch of cobblestones that we want to integrate into the course. This cobbled road (Route de Canons) can be reached by going down a long, technical and at times steep descent. The last stretch will be covered in a new sand layer to even out the underlying steps."

"Nothing they have brought in added any value. It's just dangerous, looking for sensation and has nothing to do with cyclo-cross," he said according to Het Nieuwsblad.

Lucinda Brand pre-rode the course with team manager Sven Nys to pick out the best lines, posting the video to Youtube.

The course has always been one for the climbers, but the steep cobbled ascent and slick off-cambers turned Sunday's course into a race of attrition.

Brand crashed on the descent but still managed to hold off Ceylin del Carmen Alvarado for the win.

The conditions on Sunday turned from bad to worse, with heavy rain falling on the elite men, creating deep puddles at the bottom of most descents and rendering the off-camber sections slick and greasy.

World Cup leader Eli Iserbyt succumbed to the cold, first stopping in the pits for a jacket and then abandoning, having to be carried off the course to the medical tent.

Namur World Cup as a rider - pretty much all the same as above for me. Yes, those steps were silly, the sand did nothing and they ended up dangerous anyway. The better solution in my opinion would be to just cut a brand new descent in, as the cobbles climb was a good addition 👍 pic.twitter.com/BXiL9mgAIWDecember 22, 2019

World Cup #Namur will never get more easy, but enjoyed myself on the course. Difficult circumstances, but happy to keep my #Brava in control. Slowly moved up a little in the field and will take some confidence from the last lap. Many thanks to my pitcrew in this mudfest... Next up: World Cup #HeusdenZolder on thursday. For now first: Merry Christmas everybody! Wish you all a good time with your loved ones. #RideForMore #LivForward #Telenetucicxwc Marianne Vos