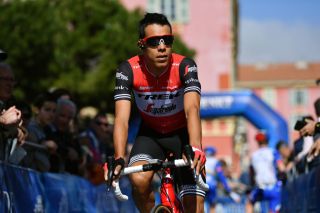 The UCI announced Wednesday that it has banned Jarlinson Pantano for four years after the Colombian returned a positive test for Recombinant Erythropoietin (EPO) in February of 2019.

"The Union Cycliste Internationale (UCI) announces that the UCI Anti-Doping Tribunal (the Tribunal) has rendered its decision in the case involving Mr Jarlinson Pantano Gómez," read a brief statement from the sport governing body.

"The Tribunal found the rider guilty of an anti-doping rule violation (presence of Recombinant Erythropoietin) and imposed a 4-year period of ineligibility on the rider.

"In accordance with the Procedural Rules of the Tribunal, the decision will shortly be published on the UCI website."

Pantano 'waiting, wishing' for doping case to be resolved

Pantano, who raced for the Trek-Segafredo team, was suspended from the team last April after he was informed of an Adverse Analytical Finding (AAF) for the blood boosting drug in an out-of-competition doping control carried out on February 26 by the Cycling Anti-Doping Foundation (CADF).

The positive test came two days after the final stage of the Tour du Haut Var, where he finished 20th. His last race with Trek-Segafredo was at the Volta a Catalunya in March last year.

Initially silent regarding his positive test, Pantano later said he hoped the case would be resolved in a public statement on social media. He was expected to request analysis of his B-sample.

Pantano, who denied using the performance-enhancing substance, announced in June that he would retired from the sport.

Pantano, now 31, turned professional in 2012 with the Professional Continental team Colombia-Coldeportes. He moved up to the WorldTour level with a two-year contract with IAM Cycling in 2-15 and 2016 before joining Trek-Segafredo in 2017.