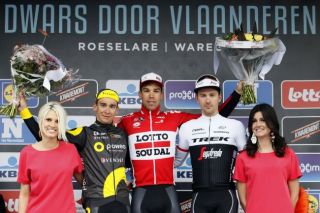 Jens Debusschere will ride for B&B Hotels-Vital Concept in 2020 after signing a two-year contract with the Pro Continental squad. The former Belgian champion arrives after spending a season in the colours of Katusha-Alpecin. In 2020, Katusha will merge with Israel Cycling Academy.

Winner of Dwars door Vlaanderen in 2016, Debusschere is a cobbled specialist who carries a turn of speed in the finishing straight, and he will fulfil a dual role at his new team, serving as a leader in the Classics and as Bryan Coquard’s lead-out man in bunch sprints. Debusschere’s victory at Dwars door Vlaanderen, incidentally, came at the expense of Coquard, as he pipped the Frenchman in a tight sprint in Waregem.

“That win had a particular taste because it came the day after the terrorist attack at Brussels airport,” Debusschere said in a statement released on Monday. “Bryan said that, given the circumstances, it was better that a Belgian rider won that day. Since then, we’ve often crossed paths. I never beat him again, but our relationship has remained excellent.”

Debusschere has won 15 races in a professional career that began at Lotto Soudal, though in recent seasons, he has sacrificed his own sprint ambitions in order to serve as a lead-out man. He will link up with former teammates Kris Boeckmans and Jonas Van Genechten at his new team. “Leading out a sprint is what I do best, and that’s why I’m joining B&B Hotels-Vital Concept. Bryan is a top sprint and he’s shown he has the quality to win the biggest races.”

Although Debusschere acknowledged that Coquard would be the chosen sprinter if both riders made the front group in the finale of Gent-Wevelgem, he described the race as being equivalent to his World Championships. He has placed in the top 10 on four occasions at Gent-Wevelgem, including 5th place finishes in 2015 and 2018.

“Like all Flemish riders, I’m focused on the six weeks between Omloop Het Nieuwsblad and Paris-Roubaix, but I know that I’ll never win the Tour of Flanders. The course has become too hard and I’m at my limits there,” Debusschere said. “I’ve been in the top 10 twice at Roubaix but I know that it will be hard to win it one day. On the other hand, I know I can win Gent-Wevelgem. I’m obsessed by that race. It’s made for me. I’ve always done well there. It’s my World Championships.”