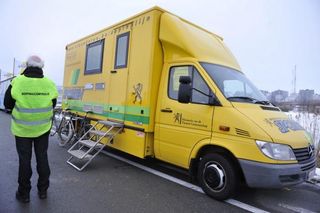 The Cycling Anti-Doping Foundation (CADF), the independent testing agency set up by the UCI in 2008 following a spate of high-profile doping scandals, has raised objections to the UCI's decision to explore a collaboration with the International Testing Agency (ITA).

The UCI announced earlier this month that its Management Committee had decided to "look into the possibility of working with the International Testing Agency (ITA) on anti-doping" but that it would "make sure CADF’s expertise is preserved regardless of the outcome of the discussions".

The press release specifically called out Operation Aderlass, the Austrian investigation that uncovered a blood-doping ring allegedly carried out by former Milram doctor Mark Schmidt. Five Nordic skiiers as well as Georg Preidler (Groupama-FDJ), Stefan Denifl (who signed with the CCC Team but dissolved his contract before the 2019 season started), Bahrain-Merida's Kristijan Koren and Borut Bozic and former pro Alessandro Petacchi were all sanctioned following the investigation.

The UCI's press release stated that "it is obliged to consider all available means for ensuring and enhancing protection for clean cyclists" and that "recent developments such as the Aderlass investigation show one more time that doping knows no boundaries, neither between sports nor countries".

In the same announcement, the UCI said that CADF director Francesca Rossi's departure was unrelated to the discussion about using the ITA.

On Friday, the CADF board issued an open letter decrying the UCI's decision, stating "Since its foundation in 2008, and vitally its independence in 2013, the CADF has been recognised as one of world’s most comprehensive, innovative, efficient and credible anti-doping organisations", adding that it "manages one of the most comprehensive anti-doping programmes globally, conducting more tests than any other Olympic Sport organisation".

The CADF said that they were surprised that the proposed ITA collaboration was taken without the input of cycling's stakeholders, many of whom have funded the CADF's activities over the past decade, and are concerned that going with an agency that handles many sports could mean cycling would get a smaller share of the anti-doping funds and resources.

"The work of the CADF is carried out on behalf of the cycling community and is funded by the community, guaranteeing that the resources are being used appropriately for the sport of cycling while maintaining continuous dialogue with all stakeholders, teams and organisers. With a different governance model for anti-doping, the same assurances on fund control and allocation for cycling cannot necessarily be given," they wrote.

The CADF is largely funded by the top men's road teams. Its 2018 financial statement showed it had collected over 15,000 doping controls, the majority in men's pro road cycling. In 2018 the teams paid over 5.5 million CHF into the CADF, with the UCI contributing 1.262 million CHF and the rest of the funds coming from race organisers.

The ITA was founded by the IOC, receiving a 4.78 million CHF donation from the Olympic Movement in 2018 and taking in 1.3 million in accounts receivables. It only began activities in June of 2018 and has similar objectives to the CADF, including testing in and out of competition, the use of intelligence to combat doping, collection of samples for the biological passport and tracking athlete whereabouts using ADAMS.

On Monday, Jumbo-Visma manager Richard Plugge voiced his support of the CADF on Twitter, writing "Very concerned about this idea (without consultation of the main stakeholders) by @UCI_cycling. Cycling has been a frontrunner in the world of sports for many years now on this topic. We should be very cautious with changes."

The UCI said the CADF would remain in control of cycling's anti-doping activities through the 2020 season, but the results of its discussion with the ITA would be announced at the Management Committee meeting at the 2020 UCI Cyclo-cross World Championships in Dübendorf, Switzerland in February 2020.

Board of the Cycling Anti-Doping Foundation

To the Global Cycling Community

Future of the fight against doping in cycling

As we are sure many of you are aware, in recent days there has been an unprecedented challenge to the future work of the Cycling Anti-Doping Foundation (CADF) in the global fight against doping in the sport of cycling.

Over the last ten years, cycling has worked hard to improve its reputation and distance itself from some of the scandals that blighted the sport in the past. This is in large part a result of the hard work carried out by the CADF. Since its foundation in 2008, and vitally its independence in 2013, the CADF has been recognised as one of world’s most comprehensive, innovative, efficient and credible anti-doping organisations.

Many have looked at the practices and procedures employed by the CADF, under its ISO 9001 certification, as a benchmark for their own work, as CADF manages one of the most comprehensive anti-doping programmes globally, conducting more tests than any other Olympic Sport organisation. It has built an intelligence and investigations unit that is equipped to act effectively on information received, handle case management according to clear processes and manage a whistleblowing system.

It has taken a significant period of time, investment and expertise to establish the credibility that CADF enjoys globally, operating to the highest levels of integrity. The work of the CADF is carried out on behalf of the cycling community and is funded by the community, guaranteeing that the resources are being used appropriately for the sport of cycling while maintaining continuous dialogue with all stakeholders, teams and organisers. With a different governance model for anti-doping, the same assurances on fund control and allocation for cycling cannot necessarily be given.

Such a change would reverse the trend being applied by other sport federations such as International Tennis Federation, World Athletics and International Biathlon Union, to name a few, who have recognised the importance of having dedicated independent bodies in place to protect

the integrity of their respective sports for the management of issues including doping, match fixing etc. They are following the CADF model already established for this purpose.

As a result of the news published by the UCI in recent days, some of you may be wondering why there should be an analysis being made by the UCI to investigate future collaboration with the International Testing Agency (ITA). We of course cannot underestimate the constantly evolving landscape that exists in sport, but it nevertheless comes as a surprise to us that such a decision would be initiated without a comprehensive consultation period with the cycling community. In any case, it must be the cycling community to make a decision, which needs to be based on facts and reason, and not rushed.

While we take nothing away from the work of the ITA, which is already benefiting some sports organisations, and Major Event Organisers (MEO), the CADF is without doubt best positioned to continue to serve anti-doping in cycling with the dedication, expertise and integrity that have been the foundation of its work since its establishment. The organisation possesses full knowledge of the sport across all disciplines and is led by a team of highly competent experts in their field who produce outstanding results, as recognised by UCI itself.

We invest significantly in all our programmes, including intelligence and investigations and the athlete biological passport, with dedicated staff and innovative tools at our disposal, across each area. The CADF has always engaged with its stakeholders to ensure that it delivers the best for the sport. The team has established excellent relationships with all cycling stakeholders and has established real credibility not only throughout the cycling community but globally with The World Anti-Doping Agency (WADA) and National Anti-Doping Agencies and relevant national law enforcement authorities, as was the case for the work of the CADF with the Aderlass issue.

The CADF has worked tirelessly to create a solid foundation and instill confidence by cycling’s stakeholders in its work, for the protection of the sport. The position of the UCI has been made public with a timeline having been identified for its assessments. A decision on the future of the cycling anti-doping programme could be made in February 2020.

However, with a possibility of changes, it is now up to the cycling community to assess whether the risk of change is for the good of the sport. We want the community to have its voice heard about the future of anti-doping in its sport, and we invite any interested party to contact us at any time via email at christophe.misteli@cadf.ch, CADF Board Secretary. We are ready to listen to your concerns and suggestions as we continue to work hard for the benefit of cycling.

The Cycling Anti-Doping Foundation Board