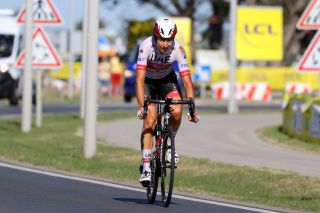 Stage 10 of the Tour de France may have looked like a plain old sprint stage on paper, but there was plenty of action on the road from Île d'Oléron to Île de Ré.

Sam Bennett (Deceuninck-QuickStep) triumphed in the sprint to take his first Tour stage win, taking the green jersey with it, but it was a miserable day out for many others in the peloton.

Two men left the race with broken bones, another lost a priceless memento in a crash, there was a hopeless breakaway along the way, and numerous others hit the deck in a brutal day out.

Read on for the news shorts from stage 10.

Broken bones for Formolo and Bewley

In something of a surprise given the series of crashes that befell the peloton on stage 10, only two riders have left the race on Tuesday night.

12 riders visited the medical truck for X-Rays after the stage, with Davide Formolo (UAE Team Emirates) and Sam Bewley (Mitchelton-Scott) both suffering broken bones midway through their Tour debuts.

Formolo, who finished the day 164th of 164 finishers, went down in a mass crash with 65km to go, fracturing his clavicle after hitting the deck. He'll get an operation in the next two days and is expected to miss upwards of a month of action.

"Davide has a midshaft clavicle fracture which is minimally displaced," team doctor Jeroen Swart said. "He will have an operation on it in the next 48 hours and will hopefully be back racing in 5-6 weeks."

Bewley, meanwhile, crashed 30km earlier, fracturing his wrist. He was unable to continue and left the race shortly afterwards.

Nicolas Roche suffered a hard crash during stage 10 of the Tour de France some 70km into the 168km stage to Île de Ré and it looked for a time like the Irishman might not get back up. But after being helped to his feet and given a few moments to recover, the Sunweb rider got back on his bike and back into the peloton, eventually finishing in a chasing group almost 11 minutes behind stage winner Sam Bennett (Deceuninck-QuickStep).

But he'd left something precious behind: a bracelet. Roche appealed on Twitter for anyone who might find the lost piece of jewelry that has sentimental value.

From previous images of Roche, he wears a thin leather band with gold beads on his right wrist.

The location of the crash was near the junction of the D72 and D131 near La Prée. Roche fell on the south side of the road just before an emblem of the department La Charente Maritime painted on the tarmac.

Not really what i had in mind.Actually lost a very precious bracelet kilometer 75 ish in the crash if any founds it would be great! Thanks! pic.twitter.com/YWyMFaH9G3September 8, 2020

Stefan Küng won the Tour de France's most aggressive rider prize on Tuesday even though his escape with fellow Swiss rider Michael Schär only lasted half the stage but the Groupama-FDJ rider was happy to get out of a highly nervous peloton even if it was for less than two hours.

"Initially, I didn't really plan to go on the attack today," Küng said, "but Michael Schär wrote me a text message and asked me: 'what do you think? Should we try'? A day like today was supposed to be very nervous. We did not have a rider for the GC, nor a sprinter, so I was like 'why not, it's going to be a less stressful day if you're in front than if you're in the peloton'."

Groupama-FDJ's leader for the general classification, Thibaut Pinot, had a terrible time in the Pyrenees after hurting his back in a crash on the opening stage and lost even more time on Tuesday's stage to Île de Ré on a day of tense racing with a threat of crosswind splits and imminent crashes on a route littered with roundabouts and narrow roads.

The peloton, fearing things could get out of control, kept the two Swiss men within two minutes and pulled them back with more than 90km still to race. "They didn't really want to give us a lot of room, and as soon as it got really nervous, they came back immediately," Küng said.

"We saw straight away that the sprinters were in control and that there was nothing to hope for," said team DS Thierry Bricaud. "You can't risk letting these two riders get a real gap or you can get in a lot of trouble. The sprinters don't have a lot of chances either and when there is a real one like today, they don't want to let it go."

"We obviously approached this stage more calmly than usual, because there was no real stake for us. However, when there is no stake, you can subconsciously be less focused, less attentive, and be stupidly caught up in the crashes. There were indeed a lot of them today. Matthieu [Ladagnous] himself fell down, but without consequences fortunately. The others got through it, and that's the most important. As will be the case tomorrow, the purpose was to not take any risk since we had nothing to gain. We just had to stay careful," Bricaud concluded.

Skujins battles on despite road rash on both sides

Trek-Segafredo rider Toms Skujinš was another rider in the wars on Tuesday, crashing off-camera in the first half of the stage. The former Latvian champion was later seen at the medical car with his shorts torn on both sides and road rash down his left-hand side.

In a video posted to social media by his team, Skujinš gave an update to his condition while receiving his post-stage massage, saying that he should be able to start stage 11.

"I feel OK actually. The only thing that worries me is my knee because I hit it pretty bad. But I finished the stage so hopefully it's not that sore that I cannot start tomorrow.