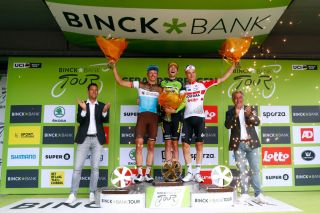 The BinckBank Tour’s WorldTour status is at risk, with the UCI imposing a series of measures on the Belgian/Dutch race in the wake of 'safety failings' at the 2019 edition in August.

Numerous riders complained about safety during the event, with concerns ranging from the width of the roads to the barriers used in the closing kilometres of some stages.

The association of professional cyclists, the CPA, vented their frustration with the UCI as they prepared to take up the issue with the governing body. Discussions were held most recently at the UCI’s headquarters in Switzerland last week, and it was decided action would be taken.

"Based on the report of the UCI Commissaires’ Panel, and having heard from the organisers, the UCI identified various situations constituting breaches of the UCI Regulations concerning event organisation and safety, and the Specifications for Organisers," read a statement from the UCI on Monday.

As a result, the UCI will evaluate the “standard of quality and safety” of the organisation of the 2020 edition before deciding if the race should remain part of the WorldTour calendar. "A decision regarding the status of the event will then be made based on that evaluation," read the statement.

In the meantime, the UCI will take steps to help the 2020 edition run as safely as possible. A Technical Advisor will be appointed by the UCI and paid for by the organisers, while the UCI will also devise a ‘plan of action’ for next August’s race. Finally, a fine of an undisclosed amount was handed to the organisers.

The sanctions are the first to be imposed under a new section introduced to the UCI regulations earlier this year, allowing for disciplinary rulings on organisational shortcomings.

However, race director Rob Discart argued the UCI had assessed the route and deemed it to be safe.

"We got the green light [from the UCI] for our race without any problems," he said. "Only the time trial we had to change a bit. The rest turned out to be in tip-top shape.

"We think that our stages, and therefore stage 3 in Aalter, are safe. Mind you, I understand the criticism of some riders."