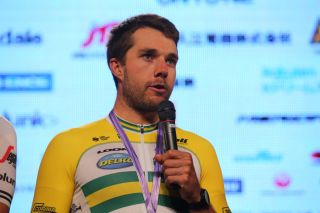 The 2020 Lexus Blackburn Bay Crits get under way in Geelong, Victoria, on January 3, and the criterium series that opens Australia's 'summer of cycling' will once again welcome back reigning national criterium champion Brenton Jones, who also won the series overall in 2014.

Jones has spent the past two seasons racing in Europe for French team Delko Marseille Provence, but will this season ride for the British Continental outfit Canyon dhb p/b Soreen, racing a European programme that he hopes will allow him to step back up to at least Pro Continental level again the following season.

At the Bay Crits in Geelong on Friday, and across the weekend, however, the 28-year-old sprinter will ride for a Novotel-Mitchelton composite team that also includes fellow sprinter Kaden Groves and Classics specialist Luke Durbridge, both of whom normally ride for WorldTour team Mitchelton-Scott.

"It's a strong team, with a mix of guys, and with some good experience there with Luke and Kaden as well," Jones told Cyclingnews. "We've got a couple of options, and I'd love to try to win a stage or take out the overall again," he said.

"I think for the Aussie teams, the series is everything for them. Being the first big event of the Australian summer, it gets good publicity, so it's an opportunity for teams to do well for their sponsors, get noticed, get in breaks and try to get results, while for the European riders – and for guys like me, who are heading back overseas – it's important, too, as those teams still love to see their riders getting results outside Europe."

Jones has a special connection to the Bay Crits in that his mother, Karin Jones, is the event organiser, while former pro and family friend John Trevorrow is the race director.

"It means that I've always been that extra bit inspired to do well there, so winning in 2014 was a massive highlight," explained Jones. "Every year since then, I always see myself on the podium, or up there in the results, and am always in the hunt for a performance there. Having a family involvement and being friends with John – he came to my wedding two weeks ago – just means that the connection with the race inspires me to try to perform."

For 2020, the first two rounds of races in Geelong have switched places, compared to last year, with the Ritchie Boulevard course being raced on Friday, followed by the Eastern Gardens course on Saturday. The racing then moves to Williamstown, a little closer to Melbourne, for the series finale, after which the overall men's and women's winners will be crowned.

"There are often no more than 20 riders that finish the Ritchie Boulevard race," Jones told Cyclingnews of the men's race. "Maybe even only 15, and when you look at the elite field, you're only again going to have about that many that finish this year as it's so demanding and intense.

"It's a sprint, corner, sprint, corner kind of race, and you've got to do that for an hour, so it's about positioning," he added, "so the top 20 or so just stay as they are, and the ones at the back just get tailed off the back.

"The Eastern Gardens course is a bit more flowing, and more of a kermesse-style race," continued Jones. "It's a bit longer – 1.9km – so that opens it up a bit more for some breakaways. There was a break that won last year – and I had a teammate, Raphael Freienstein, take second on the stage – so you've got the possibility of sending guys up the road, which makes for challenging racing, and then there's a crosswind from the water that happens every year to deal with, too."

The third and final race in Williamstown is, said Jones, "one of my favourites".

"I think I've been second to Caleb Ewan two or three times there, so I think I know how to race it. And he's not here this year, so I'm hoping to take it out. It's a fast circuit, with nice, flowing corners. You have to brake a little bit, but otherwise it's a pretty straightforward square criterium," he said.

Lotto Soudal sprinter Ewan won both the Ritchie Boulevard and Williamstown rounds last January, and went on to win three stages at his first Tour de France in July. His absence from the Bay Crits this year only serves to strengthen Jones' resolve to do well.

"Absolutely," agreed Jones. "Caleb's a gun rider. There've been some stages of the Bay Crits over the years when I've got the better of him, but, at the same time, there have been a plenty when he's come out on top, so him not being there opens up the door, and gives me more chances, which is great."

Jones also heads into this year's Bay Crits as the reigning national criterium champion, having taken the title for the first time a week after last year's series.

"The Bay Crits provide an opportunity to sharpen the legs, replicate what you need to do for the national criterium championships and get into the rhythm of crit racing," said Jones. "You can train all day for criterium races, but to actually race a race and have that intensity, and that unpredictability of what cycling is, is important, and I think the Bay Crits have always been a great opener for me.

"After the number of times I've been on the podium for the criterium championships, and then to have won it last year, it goes to show how well I perform after the Bay Crits, and I'm looking forward to doing it again this year, as I know I'll have good legs. It's like a good recipe: if it works once, then keep repeating it, and to do the Bay Crits is fun, enjoyable, good racing. I perform there as a good crit racer, and then the national championships is just a great end to that little week of racing the legs.

The Australian won two stages of La Tropicale Amissa Bongo in Gabon, Africa, with the team in 2018, a stage of the Tour of Taihu Lake in China in 2019, and stages at the Tour of Qinghai Lake, also in China, in both years.

"Two years with a French team was a great experience," he said. "I wouldn't have said 10 years ago, when I was a young cyclist, that I would have been riding for a French professional team, starting Paris-Roubaix twice, and racing Paris-Nice against Richie Porte and the likes, so some of the races I did with them, and the experiences I've gained, have been really beneficial and valuable, and I think that's going to set me up well for the future.

"And I got a few wins with them, which they were pleased about. Now we've parted ways, but now I'm looking forward to a new challenge with Canyon dhb.

"They're a Continental team, but they've got a race calendar and a set-up like a Pro Conti team, and that's where they want to get to in 2021, and if I can find myself there and they step up next year, then that would be great for me to get back to that level. Everyone's motivated to support each other, and I'm looking forward to it," said Jones, who also rode for British team JLT Condor during the 2017 season.

"I tried to find a professional contract [Pro Conti or WorldTour] for this year, but there were a lot of teams looking for very young riders and climbers, and I don't fit either of those categories," he laughed. "As a sprinter, it's tough. Although you could say that I've got the ability to be at WorldTour level, it's hard to make that happen. But Canyon's calendar is going to give me opportunities in Europe to show teams what they've missed out on."

Jones said that there was a palpable shift towards teams looking to take on young, gifted climbers – all perhaps searching for that next Egan Bernal.

"I think that teams are now definitely looking at young, young guys – riders that are motivated, that don't have families, that don't have anything that's going to hold them back from going away for months at a time to training camps at altitude," he said.

"Teams are looking at these guys to develop them for the future, but teams are missing out on the experience they could have from riders like me, or any number of riders who are now retiring. It's a shame in that respect, but that's the way that a lot of the teams are going."