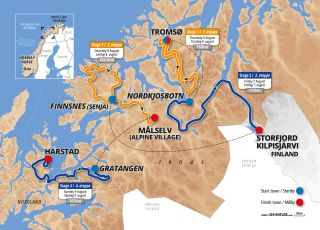 The Arctic Race of Norway will venture into Finland for the first stage outside of the host country in 2020. Organisers announced the route for the four-stage event, which will start on August 6 next year.

The northernmost pro race in the world start in Tromsø, home to the Northern Lights Observatory, with a 166km route that heads southeast toward Nordkjosbotn and then loops back to Tromsø for two closing circuits around the city centre of 8.5km each with one categorised climb (1.2 km at 8%) with 2.5km to go. Previous winners in this stage include Alexander Kristoff and Dylan Teuns.

On the second stage, the riders will start in Nordkjosbotn, a first-time host city, and then make their way into Finland for the first time in the race's history, skirting the Storfjord before climbing 500m to Kilpisjärvi. With four categorised climbs along the route but a flat finish, the 172km stage is expected to suit strong sprinters.

Stage 3 from Finnsnes to Målselv will follow the same 184.5km route as the one the race took in 2015 when Ben Hermans took the stage win. The 'queen stage' will have five categorised climbs including a summit finish at the Målselv ski resort at the end of a 3.7km-long climb.

The battle for the overall classification continues on the final stage with a tough 161km stage starting in Gratangen and riding over three classified ascents en route to Harstad. The closing 8.5km circuit includes two climbs: the 1.4km Novkollen and the 700m-long push to the finish line that kicks up to 8.5%.

Thor Hushovd, former world champion who won the race's inaugural edition, is now an ambassador for the event says the race's eighth edition will be "a spectacular race that goes down to the wire".

"The 2020 edition also has new things in store, including a stage finish in Kilpisjärvi, Finland. Both this stage and the previous one in Tromsø are tailored to sprinters, but punchy climbers will take centre stage from then on. If one thing is certain, it is that our landscapes will again leave riders and TV viewers filled with awe."

Alexey Lutsenko won the 2019 edition by a single second over Warren Barguil thanks to time bonuses on the final stage.  Astana also prevailed in 2018 when Sergei Chernetski was in the stage 2 breakaway that decided the overall. Other winners include Dylan Teuns, Gianni Moscon, Rein Taaramae, and Steven Kruijswijk.

Route of the 2020 Arctic Race of Norway