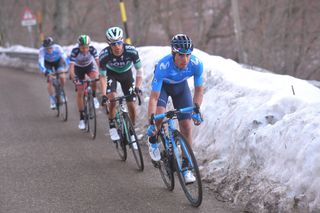 RCS Sport announced the route for the 55th edition of Tirreno-Adriatico on Thursday, with the WorldTour stage race set to take place from March 11 to 17 in 2020. The race, which has started with either a prologue or team time trial on the western shore each year since 2011, will now begin with a 134km stage in Lido di Camaiore.

After eschewing the high mountains this year, the 2020 Tirreno-Adriatico route will feature a summit finish at Sassotetto on stage 4. The 1345m-high climb last featured in 2018, when Mikel Landa won at the snow-banked summit.

As per tradition, Tirreno-Adriatico will again conclude in San Benedetto del Tronto with a 10.1km time trial where this season Primoz Roglic snatched the overall victory from Adam Yates after the Briton led the race from the opening road stage.

The Race of the Two Seas in 2020 will have a mix of traditional stages and new routes, with the new opening stage taking on a tough 26km circuit including the Monte Pitoro before the road levels out for a likely sprint finish.

The second stage from Camaiore to Follonica, 198km in length, takes riders over the Sassetta mid-stage on a largely flat route with a small kicker, the 'Impostino' before the finish. Stage 3 is the longest of the race at 233km and includes two classified climbs - the Scansano and Poggio Nibbio - the latter of which comes with about 45km to go, and an uphill finish.

Another long stage follows with a 204km route from Terni to the Sassotetto summit finish. As well as featuring as a summit finish in 2018, the ascent of Sassotetto was on the route on stage 5 to Camerino in 2009, when Michele Scarponi claimed stage victory.

This year's Sassotetto stage traverses four classified climbs - the 15km long Pettino, the shorter Forca di Ancarano, and the ascent to the Sanctuary of Macereto on the Santa Margherita before the 13km ascent to the finish.

Loreto will hold the finish of stage 5, a punch 181km stage from Pieve Torina dubbed as the "walls" stage by race organisers. It's a lumpy stage featuring three 25km circuits around Loreto with the Recanti ascent and a steep uphill finish - perfect for the Classics specialists.

The sprinters will enjoy the 178km stage from Castelfidardo to Senigallia, which brings the race down from the undulating hills to a completely flat and wide four-lap 16km circuit with the last turn 1km from the line.

The 10km individual time trial along the seafront is the same course that has featured since 2015 with an intermediate check 4.7km in and a straight 2.5km final.

Stefano Allocchio, Race Director of RCS Sport, said: "This year's course will be a little different from the last editions. We decided to remove the team time trial and opt for a road stage suitable for sprinters.

"There will also be the uphill finish at Sassotetto – the same that saw Mikel Landa's victory in 2018 – which will be a key moment of the race. Before closing with the traditional individual time trial in San Benedetto del Tronto we will have two dangerous stages in Lazio and Marche – with its famous walls – and the finish in Loreto.

"I believe it is a balanced route that is suitable for all-round riders who can be competitive on all terrains. I am sure that the final victory will remain uncertain until the last stage – as has happened in previous editions."