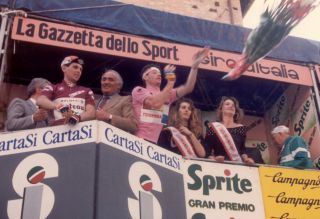 The Giro d'Italia should have been reaching its climax on Saturday, with the final mountain stage to Sestriere ahead of Sunday's short time trial into Milan.

The COVID-19 pandemic has meant the history books will have to wait for their latest additions, with the race rescheduled to October.

In the meantime, here are the figures that tell the story of the Corsa Rosa's rich history.

The total number of editions of the Giro d'Italia. This month should have seen the 103rd, but we'll now have to wait until October. After creating the Giro di Lombardia and Milan-San Remo, Italian sports newspaper Gazzetta dello Sport decided they wanted to host a race around the whole of Italy. Influenced by the success of the Tour de France and keen to get one over on their newspaper rivals Corriere della Sera, the paper announced the race on August 7, 1908. The race has been suspended twice during the two World Wars.

The most overall victories by any rider. Three riders are part of this exclusive circle: Alfredo Binda, Fausto Coppi and Eddy Merckx. A total of 49 years separate the first of Binda’s titles in 1925 and the last of Merckx’s in 1974.

The smallest gap in seconds between the winner and the second placed rider. It happened in 1948 when Fiorenzo Magni beat Ezio Cecchi to take the first of his three titles. Eddy Merckx edged out Giambattista Baronchelli by 12 seconds in 1974 to win his final Giro d'Italia. Fiorenzo Magni had another close call in 1955, beating Fausto Coppi by just 13 seconds.

Fausto Coppi is the youngest ever winner of the Giro, aged just 20 years and 158 days when he triumphed in 1940.

The number of Giro wins by Italian riders - the most of any country. Taking into account repeat winners, there are 41 Italian Giro champions. Belgium, France, and Spain are all stuck on single figures. Riders from 15 different countries have won the Giro d’Italia title.

The length in kilometres of the longest ever Giro d’Italia in 1954, which was won by Swiss rider Carlo Clerici. He beat fellow Swiss and teammate Hugo Koblet by 24:16 with Italy's Nino Assirelli taking third.

The number of stages that featured in the 1909 edition of the race. Despite the dearth of stages in comparison to modern day Grand Tours, it still packed in 2,447.9 kilometres.

The number of riders that left from Milan on May 13 to begin the first edition of the Giro d’Italia. There would be far few riders when the race returned to Milan on May 30, with only 30 finishing the race.

Wouter Weylandt's race number, which has since been retired after he was fatally injured during the 2011 Giro d’Italia. Race numbers rarely end in 0 but the Giro d’Italia have since allocated the number 100 to avoid using the number 108.

Is the kilometres ridden during the longest ever Giro d’Italia stage. That was in 1914 in a stage from Lucca to Rome. Costante Girardengo won the stage in a time of 17 hours 28 minutes and 55 seconds.

The number of times a rider has won the overall title without winning a stage.

Is the most amount of days that a rider has spent in the pink jersey without winning the Giro d’Italia. Giordano Cottur spent 15 days in pink in 1946, 1948 and 1949, but his best finish is third place – something he did on three separate occasions.

That is the number of days that Eddy Merckx has spent riding in the pink jersey, the most by any rider. Fellow five-time winner Fausto Coppi is not too far behind with 65, while Francesco Moser has spent 50 days in pink but has only one Giro title to his name.

The number of times the Giro has started outside of Italy. The first came in 1965, when the race began in San Marino. This year’s Grande Partenza was meant to be in Hungary, but that has now been scrapped with the date change.

The amount of hours it took Alfredo Binda to win the second of his Giro d’Italia titles. Second placed Giovanni Brunero finished almost half an hour behind Binda while last placed Riccardo Gagliardi had to suffer an extra four hours and 53 minutes of racing.

The year that the maglia nera was introduced into the Giro d’Italia. The black jersey denoted the rider who was last in the overall classification. It didn’t last very long and was awarded for the final time in 1951.