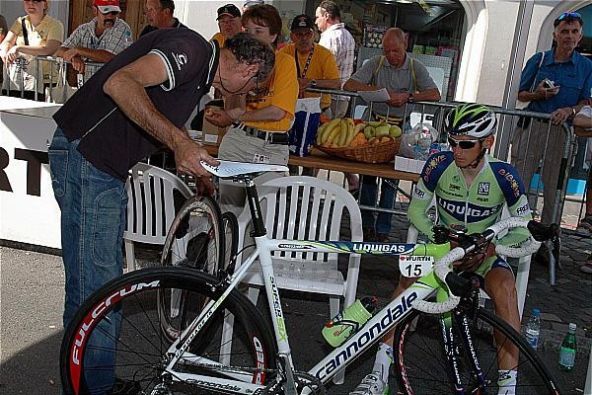 The British Olympic Association has a lifetime ban preventing any British athlete with doping offences from competing in the Olympic Games, which would stop David Millar competing in London next July. However, in November, the World Anti-Doping Agency (WADA) declared this non-compliant with it’s code, and that athletes should have the chance to compete. The BOA have appealed, and a final decision should be expected from the Court of Arbitration in Sport (CAS) in April. If the ban is lifted, Millar will want to contest the Olympic time trial, and be part of the British team looking for a road race win on home soil. If not, look out for him in the time trial stages of the biggest races, and hoping one of his opportunistic breakaways can bring him a win.

Millar’s 2011 was full of mixed feelings. After a slow start, he took the maglia rosa in the Giro d’Italia after stage 3, but that success was overshadowed by the death of Belgian cyclist Wouter Weylandt on the descent of the Passo del Bocco. Millar went on to win the final ITT of the race, and was part of Garmin-Cervélo’s winning team time trial on stage 2 at the Tour de France. His year ended in Copenhagen at the world championships, coming 7th in the ITT, and supporting Mark Cavendish to his win in the road race.

After coming 3rd on the extraordinary Strade Bianche stage, Millar had to pull out of the Giro d’Italia due to illness, but his season finished on a high note, with a silver medal in the World ITT Championships and a gold and a bronze in the Commonwealth Games.

While his long breakaway on Stage 6 of the Tour de France didn’t result in a stage win, it did give him the combative jersey for the day, and he got that Grand tour stage win later in the year, in the Vuelta.

While he couldn’t race at the Olympics, because of his doping offence, Millar did achieve his highest placing in a major stage race. It was also the year of his bike toss, after his chain broke in the final kilometre of a successful 5-man break in stage 5 of the Giro d’Italia.

Millar considering role to drive change, calls on riders to 'buy into their future'

'The time has come to modernise and reform it,' says Briton of pro riders' union

'I was absolutely bamboozled by the news of Tom Danielson's positive'