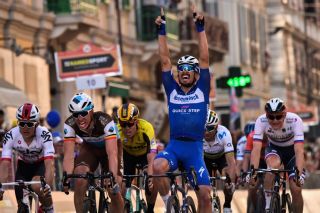 Milan-San Remo has a new summer date, and a new inland 299km route, but the climbs of the Cipressa and the Poggio should produce yet another thrilling finale as the biggest sprinters and finisseurs fight to win one of cycling's most prestigious Monument Classics.

Milan-San Remo often falls on the day of the spring equinox and, in late March, heads from the winter weather of Milan to the warmer spring conditions of the Ligurian Riviera. On the revised calendar as a result of the coronavirus pandemic, La Primavera was rescheduled as a summer race on Saturday, August 8 with temperatures of 30°C expected for much of the race, even at the 18:30 CET finish time.

Organiser RCS Sport apparently pushed to hold their Classics in August to ensure some of the races would go ahead, hedging against a second wave of COVID-19. But that only sparked further problems for the race, including a late and near-total redesign of the race route.

The mayors of a dozen coastal towns along the Italian Riviera near Savona refused to close down their roads even for an hour, preferring to focus on the thousands of Italian tourists expected on the Mediterranean coast and the related COVID-19 risks, rather than the global media visibility Milan-San Remo offers.

In retaliation, RCS Sport quickly revealed their plan B route, opting to avoid much of Liguria and stay inland until the final 40km, just in time for the Cipressa, the Poggio, and the fast descent to the finish on the Via Roma in the centre of San Remo.

In a final twist, team sizes were reduced from seven to six riders to squeeze the Italian teams of Androni Giocattoli-Sidermec and Bardiani-CSF onto the start list.

Debate about how the new date, route, and reduced team sizes will change the outcome of Milan-San Remo will no doubt last as long as the race itself. The attacks on the Cipressa and Poggio may have more of a chance of staying away, but the sprinters could again lead the charge up the legendary Via Roma finish.

Will the route change the race?

The Poggio starts with just under 10km left to race. First used in 1961, the twisting road through the San Remo flower greenhouses has become iconic and is the most thrilling part of the race. The sprinters try to control any attacks and hope a headwind plays in their favour, while the attackers wait until the steepest eight per cent sector after 2.5km to try to get away.

Milan-San Remo has made the traditional trek south towards Genoa and then along the Ligurian coast for 110 editions of La Classicissima. This year, the riders face a very different route, with different climbs and a far longer descent to the coast before the Cipressa and the Poggio. The unfamiliar roads could be the biggest factor, given that the total altitude gained increases only slightly, from 2,059m to 2,728m. The teams know every inch and every corner of the traditional Milan-San Remo, but this new route could spark some surprises.

A 10km transfer from the Piazza Castello in central Milan to the official start in Trezzano sul Naviglio means the riders will face a total of 309km and close to seven hours in the saddle. Instead of heading south towards the Turchino, the race route heads southwest via Alessandria, Monferrato and the vineyards and countryside of the rolling Langhe hills.

The Niella Belbo climb after 150km arguably replaces the Turchino and has similar gradual gradients of three per cent for 20km. However, there is also the steady Colle di Nava along another valley road in the Ligurian Alps, with a final 3.9k section at three per cent. Coming after 225km, this is likely to hurt the sprinters a little more.

The climb is followed by the fast dive down Via Pieve di Teco to reach Imperia, which could inspire an attack, or at least see a marked increase in speed. The early part is technical with several hairpins, before a faster, more direct road towards Imperia that includes four long tunnels.

The new race route finally hits the coast and the Via Aurelia after 266km of racing, leaving just 33km to go. The Capo Cervo, Mele and Berta climbs are further back the coast and so not on this year's route. The riders instead face the Cipressa after just five kilometres on the seafront. Positioning near the front of the peloton is always crucial before the start of the Cipressa.

"The finale is perhaps harder now. The Turchino was 120km from the finish, while the Colle di Nava is only 65km away from San Remo. The descent to the coast is fast and safe. It'll create an interesting finale that could be more selective," race director Mauro Vegni suggested.

The Cipressa is 5.6km long and usually inspires some form of attack. Moves there only rarely work out, but there's always a risk they that might if the right combination of riders and teams combine as the road sweeps between the olive trees.

In 2019, local resident Niccolò Bonifazio (Total Direct Energie) used his local knowledge of the descent of the Cipressa to make a daredevil attack. He got a sizeable gap, but he was swept up by the strongest teams back on the coast. The impact of the new route and the extra, late climbing will reveal itself here, but the odds of an attack gaining enough time to stay away still seem slim.

Sprinters versus the attackers

Last year, Julian Alaphilippe (Deceuninck-QuickStep) blew past early attacker Alberto Bettiol (EF Pro Cycling) and sparked the 10-rider selection that included Peter Sagan, Vincenzo Nibali, Matteo Trentin and Wout van Aert. With so many team leaders up there, they quickly got away and fought for victory. The final-kilometre attack and sprint were confused and lacking in logic, but that happens after 300km of racing. Alaphilippe wisely followed Matej Mohoric when he kicked off the sprint with 300m to go, and he then surged up the Via Roma to hold off all his rivals.

Alaphilippe will start with race number 1 as last year's winner. However, the decision to reduce teams to just six riders will make for some tough team selections, and has left the outcome of the race more finely balanced than ever.

Like each year, there are plenty of sprint candidates, but also a number of attackers who believe they can get away on the Cipressa or Poggio and then fight for victory with whoever joins the move. One rider rarely gains enough time and tips the race in his favour over the top of the Cipressa, but if the move includes the right number and combination of riders, the sprinters' chances could end in a split second.

Deceuninck-QuickStep can play options with Alaphilippe this year, joined by Sam Bennett in the Belgian team's sextet. The Frenchman has the freedom to ride his own race even if he is not in the same superb shape as 2019. He might go with the Poggio attack but then can call other riders’ bluffs if Bennett is in the chase group. That could give him an edge in the battle from the attack, or he could set up Bennett with a career-changing opportunity.

Philippe Gilbert can play a similar strategic game as he chases his full set of Monument victories, due to the presence of Caleb Ewan at Lotto Soudal. The Australian sprinter only returned to racing at Milano-Torino, where he finished second. He has the pedigree for the Milan-San Remo sprint, too, finishing the best of the rest behind Vincenzo Nibali in 2018.

In contrast, teams and riders dedicated to a sprint-finish strategy include 2016 champion â€“ and this week's Milano-Torino winner â€“ Arnaud Démare (Groupama-FDJ), Elia Viviani (Cofidis), Nacer Bouhanni (Arkéa-Samsic) and Bonifazio, who has promised to save his effort for the Via Roma.

Bahrain McLaren also seem to have gone for the sprint strategy, but not with Mark Cavendish. He is riding the Tour de Pologne and so will not ride his 11th Classicissima. Route d'Occitanie stage winner Sonny Colbrelli gets the protected spot, with Dylan Teuns perhaps given freedom to attack on the Poggio.

Michael Matthews (Team Sunweb) could arguably try to go with attacks on the Poggio or wait for a sprint finish, but he faces a difficult decision.

UAE Team Emirates face the toughest dilemma. Do they put their trust in the on-form Fernando Gaviria or the ever-reliable Alexander Kristoff? Gaviria impressed when he won a stage at last week's Vuelta a Burgos, but has twice stumbled at Milan-San Remo. In contrast, Kristoff has finished in the top 10 five times, and won Milan-San Remo in 2014.

Riders and senior directeurs sportifs face some tough strategic decisions as the days count down to Saturday's race, and then again after the early new climbs â€“ and especially on the Poggio. A wrong call could end in disaster, but it is incredibly hard to understand what the right call is at Milan-San Remo. Is it best to go with the attacks on the Poggio and try to win the reduced sprint? If a rider is outnumbered, with a sprinter in the chase group, how can he be convinced to sit up and let the sprinters fight for victory? If a team leads the chase for the sprinters, will they sacrifice their lead-out and so miss out in the Via Roma sprint?

It's always all or nothing at Milan-San Remo. Win or lose. The race can go either way in a split second, sparking agony or ecstasy. That's why the 300km ride from Milan to San Remo is always worth the wait.