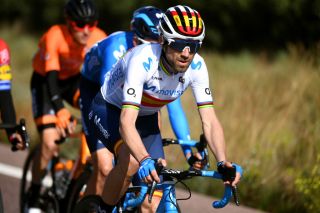 Alejandro Valverde celebrated his 40th birthday during the coronavirus pandemic-induced pause in racing and, with his main target, the Tokyo Olympic Games, moved to 2021, he considered delaying his retirement. But now with questionable form and his contract with Movistar ending in 2021, the former World Champion has cast doubts on extending his time in the pro peloton.

"I don't set myself any other goals than to go day by day and enjoy the races. For the moment I have a contract until 2021... then we'll see," Valverde said in a radio interview with Radiogaceta de los Deportes. "I had thought of continuing for another year but, as of today, I will not continue after 2021. I have to find better sensations."

August 1 marked the opening of the transfer season and the Tour de France is usually where most of the contract deals are made. From what Valverde said it sounds as if he is not considering extending with Movistar for 2022 as he stated earlier this year.

Valverde looking to extend career beyond 2021

"I'm working with the idea of finishing this year, doing the next, and then re-evaluating. I have it in mind. I feel capable of giving more to cycling," he said in June. "I feel good, with hunger and motivation. I'm 40, but in my head I'm very young."

Tokyo still remains his goal and he will continue racing until the Olympic Games next July, "if God wants and nothing strange happens" but he and his team have not found the same level as previous years so far this season. The team have but one victory - Marc Soler's win in the Challenge Mallorca. Valverde has been off the pace in the mountains, coming in 12th in the Criterium du Dauphine, almost eight minutes behind overall winner Dani Martinez (EF Pro Cycling), his team's best result.

Movistar's woes are little different to those of Team Ineos, whose Tour de France defending champion Egan Bernal is nursing a back injury and his co-leaders Chris Froome and Geraint Thomas not showing spectacular form.

The Spanish champion has refocused 2020 on the Tour de France and the Vuelta a España, aiming for stage wins in the Tour and fighting for the general classification along with co-leader Enric Mas.

"The Movistar team is looking forward to racing. We are going to try to do the best possible job in the Tour," Valverde said.

Valverde's other season goal, the UCI Road World Championships, remain in doubt after the local Swiss organisers backed out because of coronavirus restrictions.

The coronavirus continues to be a silent threat to the season as new outbreaks plague Europe.

"For La Vuelta there is still a lot to do... As it is, we cannot make plans for more than two weeks," Valverde said.