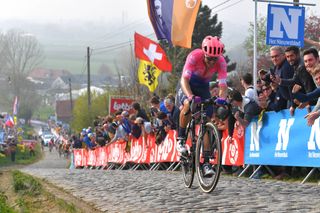 Flanders Classics CEO Tomas Van Den Spiegel has reiterated his intention to hold the postponed Tour of Flanders before the end of 2020.

The Ronde, scheduled for this Sunday, was among the litany of races to be postponed due to the coronavirus pandemic. The UCI has confirmed that all competition has been suspended until June 1, while some races beyond that date, including the Tour de Suisse, have already been cancelled.

The UCI has met with race organisers and teams to discuss contingency plans that would see the postponed Classics held in late summer or autumn. The cycling season has been extended in principle until November 1, but with the Covid-19 crisis ongoing, no clear picture for a revised calendar has yet emerged.

“The intention is that the Ronde will take place this year. Everyone agrees on that. But at the moment, it is a hypothetical discussion because we do not know exactly when the coronavirus crisis will end. We are open to all scenarios, but for now we just have to respect the measures,” Van Den Spiegel said on Belgian television station VRT on Sunday.

“We are still five to six months away from the deadline [in which to hold the Tour of Flanders in 2020 – ed.] If you look at where we were four or five weeks ago, you can see that the situation is evolving very quickly. But I think we have to be optimistic.”

Flanders Classics has seen the bulk of its slate of spring events fall by the wayside due to the coronavirus pandemic. Omloop Het Nieuwsblad was held successfully in February, but the organiser has since had to postpone Gent-Wevelgem, Dwars door Vlaanderen, the Tour of Flanders, Scheldeprijs and Brabantse Pijl.

“We are stable enough as an organization to be able to handle this for a while,” Van Den Spiegel said. “But we are looking forward to the moment when cycling can resume. The impact will be great for everyone: the teams and the organisers.”

A number of WorldTour teams have cut rider salaries due to the hiatus from racing, including CCC Team, Bahrain-McLaren, Astana and Lotto Soudal. It remains to be seen whether top-level competition can resume at all in 2020, but Van Den Spiegel warned that a blank year would have serious consequences for the sport.

“The financial impact will be big anyway and cycling is already such a fragile model, both for teams and organisers. You can see that now, because it doesn't take long before everything falls over,” Van Den Spiegel said.

In the absence of the Tour of Flanders this Sunday, Flanders Classics has organised a virtual edition of the men's race – the ‘Tour of Flanders: Lockdown Edition’ – an event that will see riders including Remco Evenepoel, Wout van Aert and Oliver Naesen compete on turbo trainers in an online replica of the final 32km of the Ronde.