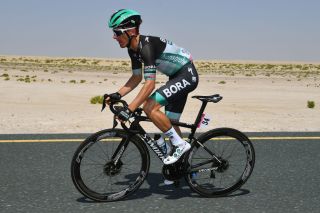 Bora-Hansgrohe's Rafal Majka – who finished third at the 2015 Vuelta a España and fifth at the 2016 Giro d'Italia – says that he'd been in great form during his approach to this year's now-postponed Giro, and that he'll now need to set new targets thanks to the enforced break due to the coronavirus crisis.

"The Giro was my big goal for the first half of the season," said Majka on his team's website at the weekend, with the Giro having been set to start on May 9. "My entire preparation was focused on that and, after an altitude training camp, I would have gone to the Tour of the Alps [originally scheduled for April 20-24].

"Since there is currently a break in racing, and it's not clear when the Giro will be held, I've had to change my training," he said, with it looking likely that the Italian Grand Tour will take place some time in the autumn.

"In Poland, the regulations are very strict, but as a professional athlete I'm still allowed to go out for training," Majka continued. "I usually ride for three-and-a-half to five hours. At the moment it's just a matter of keeping the legs moving and preserving my shape. I see this break as a type of extended winter break. The season will most likely go much longer into autumn – and maybe even into winter – so it makes sense not to push yourself too hard during training now."

While Bora-Hansgrohe teammate Emanuel Buchmann took a surprise fourth place at the 2019 Tour, Majka concentrated on both the Giro and the Vuelta last season, finishing sixth overall at both.

In 2020, the 30-year-old Polish rider has just seven racing days under his belt, including the UAE Tour in late February, where he nevertheless finished fifth overall, demonstrating that he was beginning to hit his stride in readiness for his build-up to the Giro.

"It's certainly not easy to stay focused," he added. "But in any event, I get most of my motivation from cycling itself. By keeping my daily training routines, I can cope with the situation quite well.

"It would certainly be more difficult if cycling outdoors was no longer allowed," he said. "Then things would look different. But all riders have to cope with these conditions now."