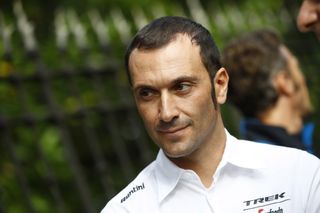 Former Giro d'Italia winner Ivan Basso has joined a number of Italian athletes and personalities who have made public appeals for people to come together to fight the spread and impact of the coronavirus by respecting the advice and rules of the latest government decree.

According to the latest official figures issued by the Italian government, there are 7375 people positive for the coronavirus, over 3500 are in hospital, 650 are in intensive care and 366 have died.  267 of the deaths and 3372 of the cases are in Lombardy.

Basso lives between Milan and Varese and issued his plea on behalf of the Lombardy region. He won the Giro d'Italia in 2006 and 2010 and has remained a public figure in Italian sport.

"We've got to work as a team, help each and work together to help each. It's the only way we can get through this very difficult moment.

"When we've overcome it, thanks to our unity, we’ll be stronger than ever. Let's stop the virus together, let's win together."

On Sunday, the Italian government introduced new, more stringent rules limiting movement for 16 million people in much of the north of Italy, including Milan and all of the Lombardy region.

People can still travel in the area for work but are advised to limit their movement as much as possible. Bars and restaurants are open until 6pm but clients must be able to sit or stand at least a metre apart. Most towns and cities have become deserted with a collapse in tourism and the economy.

Last week, the government decree sparked the cancellation of all the races scheduled for March including Strade Bianche, Tirreno-Adriatico and Milan-San Remo. Paris-Nice is still going ahead but the spread of the virus across Europe has raised doubts about the rest of the spring racing calendar.